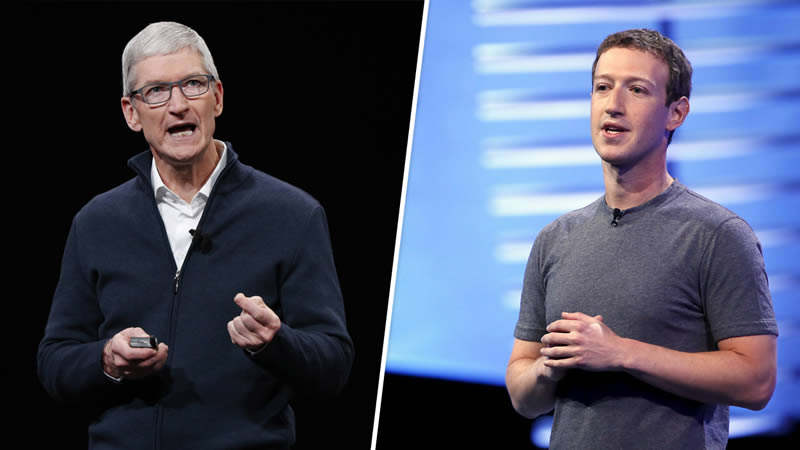 Big corporate rivalries – Coca-Cola and Pepsi, Boeing and Airbus, McDonald’s and Burger King – tend to have one thing in common: competition for the same business.

That’s why Facebook and Apple’s feud is so intriguing.

They’re both big technology companies, and that’s where the similarities end.

Almost all of Facebook’s revenue is from advertising but it provides only a small fraction of Apple’s, which comes mostly from devices and its App Store.

The two companies don’t really compete with each other – they just don’t like each other.

For years, Apple’s Tim Cook has said Facebook treats its users as a product – to make money from advertising – and plays fast and loose with their privacy.

Mark Zuckerberg, meanwhile, says Apple’s products are expensive and it has ulterior motives for criticising Facebook.

Last year, according to the New York Times, Apple even cut off Facebook’s developer tools.

The latest chapter in the feud, last week, has made relations even worse.

Earlier this year, Apple announced it would introduce a feature called App Tracking Transparency, to give people more control over their data.

Crucially, customers would have to opt in for their data – previously handed over by default – to be used by apps such as Facebook’s.

That is a massive problem for Facebook, which sells targeted adverts to make eye-watering profits. It says openly that this will damage its business.

Apple has postponed the proposed changes until next year, to give developers time to prepare.

In a letter outlining why the change was delayed last week, Apple’s Jane Hovarth couldn’t resist a pop at Zuckerberg: “Facebook executives have made it clear their intent is to collect as much data as possible.

Facebook hit back, saying: “They are using their dominant market position to self-preference their own data collection, while making it nearly impossible for their competitors to use the same data.

That is like rubbing salt into an open wound for Apple, which takes genuine pride in its belief it has a loftier business model than Facebook.

And in 2018, Mr Cook, Apple’s current boss, said he could have followed Facebook by using data to sell ads but “we elected not to do that”.

Roger McNamee, a Silicon Valley investor and author of Zucked, a critical book about Facebook and its founder Mark Zuckerberg, is no fan of Facebook either.

“Historically, Apple has had plenty of reasons to criticise other people and has chosen not to do so.

“I think that’s a tribute to how offensive they find Facebook’s behaviour.”

Does Facebook have a point, though? Is Apple in fact trying use its market dominance to freeze out competitors?

Although Apple’s advertising business is comparatively small, Morgan Stanley predicts its revenue from advertising will grow sharply in the next few years.

So does it want to stop Facebook harvesting user data just to cash in itself?

That would be an intellectually strange thing to do.

One of the most common US TV ads this autumn is an Apple privacy campaign.

A series of people blurt out embarrassing things they have looked up on the internet to random strangers.

The tagline is: “Some things shouldn’t be shared – iPhone helps you keep it that way.”

So Apple clearly believes privacy is popular – it would be odd to undermine that.

Apple has, however, been described by all sides of the political spectrum as monopolistic.

It is currently involved in a series of legal actions, after accusations it abuses its dominant App Store to impose unfair terms on developers.

And then there are accusations it doesn’t pay its fair share of tax, something the company denies.

In 2014, when Mr Cook first publicly criticised Facebook for treating its customers as a product, the Facebook chief executive hit back, telling Time magazine: “A frustration I have is that a lot of people increasingly seem to equate an advertising business model with somehow being out of alignment with your customers.

“What, you think because you’re paying Apple that you’re somehow in alignment with them?

“If you were in alignment with them, then they’d make their products a lot cheaper.”

And perhaps he has a point – Apple is one of the wealthiest companies in the world.

The even stranger part of this mutual contempt is the two companies’ co-dependence.

The iPhone would be far less appealing to many customers if Facebook (along with WhatsApp and Instagram) wasn’t available.

Conversely, would people look for other social media platforms if they couldn’t use Facebook on an iPhone?

It makes sense for both companies to have a healthy, strong working relationship.

And yet, they don’t.

Apple expert Carolina Milanesi is one of many who believes the two companies just see the world in a different way and the animosity between them is cultural and personal.

“When you’re looking at Apple, if they feel so strongly about how Facebook is behaving against their customers, then why do we have Facebook as an app on Apple devices?”

And that gets to the nub of the issue.

Until now, this has been two companies not getting along.

But it’s been a phoney war – their relationship has actually been symbiotic.

What Apple is now proposing, however, is far from phoney.

Its new rules will hurt the social network.

Of all the likely rivalries in big tech, Facebook v Apple seems, on the face of it, the least likely.

Google is Facebook’s obvious competitor; Microsoft and Google are Apple’s.

But the issue of privacy has stoked a fire between Facebook and Apple that won’t go out.

And it’s likely 2021 will see that rivalry rage still further.