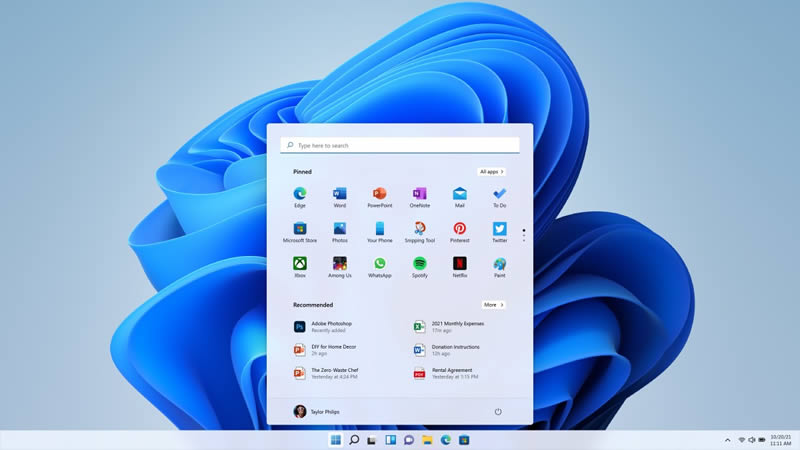 Microsoft today officially announced Windows 11, the next major version of the company’s perennial desktop operating system. The new version brings with it several improvements, including a redesigned UI, updated window management features, and even support for Android applications.

Right off the bat, the first thing you’d notice is the redesigned taskbar and Start menu. Windows 11 has a macOS style centered taskbar icon placement, eschewing the age-old left-aligned layout of all previous Windows installments. It still keeps the miscellaneous items such as the clocks and icons on the right, which does leave the left side feeling all empty.

Front and very much center of this design is the new Start menu, which drops right in the middle with a completely redesigned UI. The new menu has the search bar at the top, along with pinned apps and then a whole bunch of recommended items below. You can still change your user profile and power your PC off from here.

The rest of the UI has also received a fresh coat of paint. The windows now feature rounded corners, which are much more pronounced compared to older version of Windows and especially the sharp edges of Windows 10. The UI has even more transparency now, almost reminding one of Windows Vista, with multiple applications featuring a soft frosted glass look. Themes have been overhauled and can now have a more significant impact on the appearance of the UI.

Windows 11 also introduces Snap Layouts, Snap Groups and Desktop, which makes it easy to arrange multiple windows quickly around your desktop. It will also remember this layout so it can be carried over when moving between monitors.

Moving on from the UI, Microsoft is also taking this opportunity to integrate its own Microsoft Teams app directly into the OS. Built into the taskbar, Teams is basically a messaging/video call app that you can use to call or text your friends, family, or colleagues.

Windows 11 is also getting widgets. These widgets live in their own separate screen, which can be pulled in at any time from the left edge of the screen. As seen on other platforms, widgets will provide quick glanceable information from all of your apps that will support this feature.

Microsoft has also improved support for touchscreen devices. The OS will change its layout when it detects when you have moved to a tablet mode, such as on computers with detachable touchscreen displays. Voice and text typing has also been improved, with a new one-handed keyboard. Those using a stylus will also get haptic feedback with select pen models.

For gamers, Microsoft is bringing over Auto HDR feature from its Xbox Series consoles, which will enable HDR output even from games that don’t feature HDR. Another feature designed for the Xbox consoles and now coming to PC is DirectStorage, which takes advantage of modern NVMe SSD storage and speeds up game load times significantly. Game Pass, a subscription service for games, will also be integrated within the OS through the new Xbox app.

Microsoft has also overhauled its Store app for Windows 11. While it has a brand new UI that is designed to load and work faster, the main new feature here is the support for Android app. Through partnership with Amazon and Intel, existing Android apps will be available through the Microsoft Store and will run on Windows 11 without any specific modifications.

All things considered, Windows 11 seems like a fairly large update to the Windows operating system. Unfortunately, Microsoft did not reveal an exact date for release, promising only that it will start this holiday season and continue into 2022. However, it will be a free upgrade to anyone currently using Windows 10.