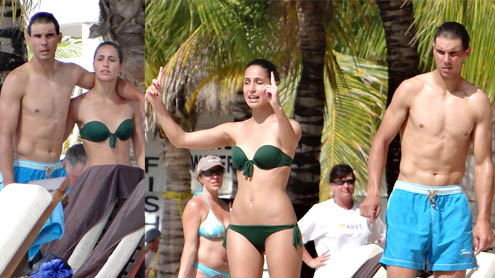 He spends most of his time flying around the world to compete in tennis tournaments.

But Rafa Nadal’s jet-setting lifestyle certainly has its perks as he spent a relaxing day on the beach in Cozumel with girlfriend Maria Francisca Perello last week in between matches at the Mexican Open.Taking time out from his grueling training schedule, the former world number one treated himself to a little down time with his childhood sweetheart.Looking as in love as ever, the long-term partners spent Rafa’s day off lounging around on the white sands with their arms wrapped around each other.

Maria, who usually shuns the spotlight and is rarely seen out with her famous other half, seemed happy and relaxed as she strolled around the beach in a strapless olive green bikini.Later in the day she changed into an eye-catching pink string bikini, wandering around with a loose-fitting white T-shirt and a pair of short denim shorts thrown over the top.

Rafa showed off his toned physique as he spent most of the day wearing just a pair of sky blue swimming trunks with his mop of brown hair slicked back after a dip in the water.The pair treated themselves to a couple’s massage during their indulgent day, making the most of their time to unwind before Rafa’s matches.Later in the day the former Wimbledon champion clearly felt the need for a few thrills, hiring a jet ski and whizzing around the bay while his girlfriend looked on.

Maria, who has a full-time job in insurance, doesn’t always jet around the world with her other half, but made an exception for her trip to Mexico.’Travelling together everywhere, even if I could, would not be good either for him or for me,’ she said back in 2011.’He needs his space when he is competing, and just the idea of me hanging around waiting on his needs all day wears me out. It would asphyxiate me,’ Maria added. – DailyMail