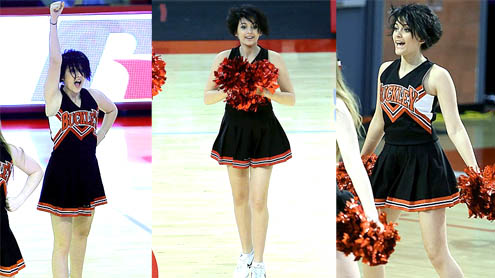 She has taken great pains to debut her new edgy look on Twitter, including showing off her new  short cropped hairdo, piercings and ripped clothing.

But Paris Jackson seems to have temporarily shed her grungy image to become an all-American varsity cheerleader at her high school.The 14-year-old daughter of Michael Jackson was seen cheering on her Buckley school’s boys basketball team on Tuesday.Dressed in a black, red and white cheerleading uniform, Paris also brandished red pom poms as she danced around with her classmates on the hardwood court.Clearly inheriting her famous father’s dance moves, the brunette, who is also a budding musician, was having a ball.

And her cheering efforts clearly helped, as Buckley earned the school’s first ever California Interscholastic Federation Southern Section title with a 54-46 win over San Luis Obispo Mission Prep.Paris, who is in the seventh grade, has been constantly changing recreational activities and hobbies.She went from playing football, soccer, softball, and volleyball to now becoming a cheerleader.The teen has been attending the expensive Buckley private school for three years.The decision for her to enroll in the extremely exclusive school, is said to have come in an effort to shield her from the public eye after her father Michael passed away in 2009.

Her transition to becoming a popular cheerleader comes after Paris last year described herself as an outsider who loves rock and roll.’The clique in my class, they don’t like me or my friend because we’re outside of the box,’ she told Glamour magazine.’We’re not copycats. Prince calls me goth, but I’m more rock ‘n’ roll. I listen to older music like AC/DC.’A ton of kids at school have made fun of me,’ she added. ‘If I had to give advice to other girls, I would say, “Hang loose and ignore them.”‘They shouldn’t faze you no matter how popular they think they are.’Like most girls her age, Paris is clearly still experimenting with her image.Last week she showed off a piece of body art on her back with what looked like a temporary tattoo, along with a ripped Pink Floyd T-shirt.

‘Late night creativity,’ the wannabe actress wrote on her social network page as she posted the back and front view photographs.Another close up shot showed a punky sparkly earring with the caption ‘finally!’ written next to it.And earlier in the month, she shared an image which debuted her new pixie-style haircut in jet black.The blue-eyed beauty usually has long brunette tresses, but recently dyed her strands to work better with her signature look of heavy dark eye-liner.She also seems to be embracing her late father’s rock star roots, recently tweeting a picture of herself strumming an electric guitar at her home, captioning the snap ‘“bass jammin music.’

Paris has also made no secret of her desire to become an actress and has already landed a role in landed a role in the film Lundon’s Bridge and the Three Keys.Despite her burgeoning fame, she said she doesn’t expect any special treatment because of her famous father.’I love my dad, and I’m proud to be his daughter,’ she said. ‘I just don’t think the title “M.J.’s daughter” fits me.’A lot of people think he’s the only reason I’m making it, but I want to show that I do have talent and that I can make it if I try. I want to be my own person.’At 16, her brother Prince has already landed a role as a special guest correspondent for the show Entertainment Tonight with his first assignment interviewing James Franco, Zach Braff and Sam Raimi about movie Oz the Great and Powerful.He has also signed on to be a guest star on the CW teen drama 90210.

The children are still under the joint care of cousin T.J Jackson and grandmother Katherine.T.J recently asked for more money to look after Paris plus her brothers Prince and Blanket.According to court documents filed by the executors, while the 34-year-old singer has been devoted to looking after the children for 40 hours per week, he is experiencing hardship as he hasn’t received any financial support since taking on the role of surrogate father.The change in guardianship came amidst a messy family dispute in which five of Michael’s siblings – Janet, Jermaine, Randy, Rebbie and Tito Jackson – claimed Katherine was being misled by the executors of the estate and ill-advised by her manager and lawyer. – DailyMail