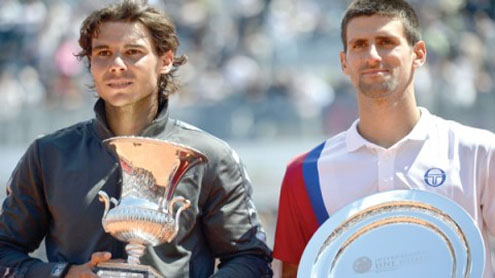 It was sweet revenge for a straight sets loss to the Serb in last year’s final and the win means that he will move back ahead of Roger Federer at number two in the world rankings. It was also the perfect preparation for the defence of his French Open title with the tournament due to get underway in Paris on Sunday and takes his career head-to-head with his rival to 18-14 in his own favour.

It meant that Nadal won claycourt titles in Monte Carlo, Barcelona and Rome with his only loss coming in Madrid where he went down to compatriot Fernando Verdasco. Djokovic failed to win a claycourt title as he prepares to go into Roland Garros where he is aiming to make it four Grand Slam titles in a row after winning Wimbledon and the US Open crowns last year and the Australian Open early this year. In a final held over from Sunday because of rain, Nadal immediately pounded out two break points on the opening Djokovic serve, but the Serb saved both with powerful backhands.

There were two more break points for the Spaniard in the fifth game as Djokovic made a mess of an overhead smash and Nadal converted the second of these, easily running down a poorly-executed Djokovic drop-shot. But just as Nadal seemed to be taking command, Djokovic earned his first break point of the match in the following game which he took as an out-of-position Nadal flopped a forehand into the net.

And two games later he had Nadal back-pedalling again with a series of punishing drives from the baseline only for a bad line-call to rob him of a first set point. Nadal levelled at 5-5 and then, on the back of some stupendous defending, he grabbed a second break of serve and made good on it by outgunning Djokovic in a thrilling exchange of shots at the net. Still riled by the line-call, Djokovic smashed his racquet at the exchange of ends and was warned by the umpire before Nadal comfortably served out to pocket the first set in 76 minutes. Nadal took up in the second set where he had left off in the first and he had the Serb scrambling from side to side in a failed attempt to prevent the five-times champion from grabbing an early break. – PT