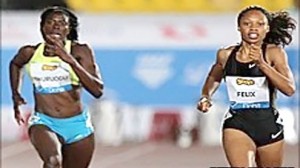 Olympic 400m champion, Christine Ohuruogu, will take on triple world champion Allyson Felix at the Manchester Great CityGames on 15 May.The British sprinter will race Felix over her world championship distance of 200m on a city-centre track.”I love street athletics where the spectators rub shoulders with you and make it so exciting,” said American Felix, who won the event last year.”I’m delighted to be returning and hoping to score another win.”It could be the first of several meetings between the pair this year, with Felix hoping to compete in the 400m as well as the 200m at the World Athletics Championship in South Korea in the summer.Other highlights of the Manchester meeting will be world heptathlon champion, Jessica Ennis, competing in the 100m hurdles against British team-mate and European indoor silver medallist, Tiffany Ofili, and in the 150m against Katharine Endacott, and Laura Turner. – BBC