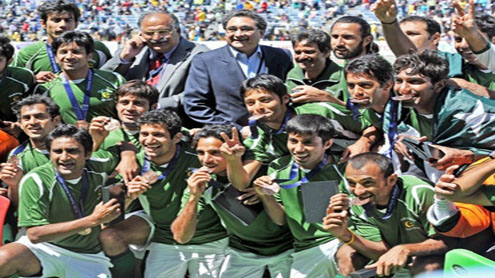 Defending champions Pakistan on Sunday retained their title after defeating hosts Japan 3-1 in the final of the third Asian Champions Trophy Field Hockey Tournament in Japanese city of Kakamighara.

Japan team took an aggressive start scoring one goal to take the lead in the first half. Pakistan replied with a comeback in the second half scoring three goals before the 66th minute. Haseem Khan, Rizwan Senior and Hammad Butt scored one goal each. The greenshirts had remained unbeaten in the tournament defeating Omman, Malaysia, China and India in the group stage matches.

The previous match played between Pakistan and Japan, during the group stages, had ended in a 1-1 draw. Malaysia secured the third position in the tournament. Defending champions Pakistan had enjoyed a smooth campaign as they defeated Oman (8-0), China (5-1) and Malaysia (1-0) before facing a challenging task against India. However, their archrivals were pipped 5-4 as the greenshirts successfully booked their berth in the final. Pakistan were the highest-ranked team in the competition as world number eight, while India (11th) and Malaysia (13th) were also touted as the teams to beat before the tournament.

Pakistan led the group stage with 15 points whereas Japan gathered 10 points to qualify for the final; they won three out of their five matches. This successful Asian Champions Trophy Tournament is a huge step in the right direction for the Pakistan team who nare keen to rebuild after failing to qualify for next year’s Hockey World Cup in The Hague, Netherlands -Dailytimes