Really talk to the Taliban 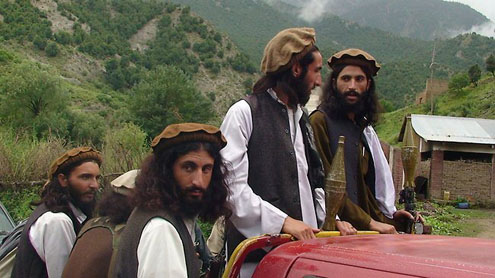 That you should never underestimate your enemy is common sense. Tragically, it seems in Pakistan common sense is in short supply.

Our old hands, who continue to pontificate on strategies as if the world was a board game, are almost patronising in the way they talk about the Taliban. “They are our boys”, “We have to win their hearts and minds”, “Taliban were our allies”, “We can still convince them”, “We can bring them in the framework of our constitution”, etc, are the kind of statements that we have heard for over a decade now. These statements are beginning to sound quite hollow. Be realistic. The Taliban — Afghan or Pakistani — are not our boys.

We face a determined foe, which is ideologically consistent, highly motivated and hell bent on overthrowing the state of Pakistan. Not once have the Taliban come to us for peace talks. It is always the Pakistani state that has attempted to negotiate, at the behest of those misguided souls who feel that the Taliban can still be brought under some sort of Pakistani banner. Others — usually ex-khakis, who served under General Ziaul Haq — feel that the Taliban are hardened warriors who can be leashed and unleashed at will. Tragically, they fail to learn their lesson from the way Colonel Imam met his end. Mujib-ur-Rehman Shami, a noted journalist, feels that if the Taliban are given a chance, they would renounce violence and embrace a political — and by extension a non-violent — form.

All of these people portray the Pakistani Taliban as a reactionary force that has emerged as a byproduct of the war on terror. A corollary of this argument is that if drone attacks stop, terrorism will wither away automatically. This is a disastrous miscalculation. First of all, the Tehreek-e-Taliban Pakistan (TTP) is a subsidiary of the Afghan Taliban. The presence of Mullah Fazlullah in Afghanistan, and the fact that Latif Mehsud was captured from there, are all indications of that. The Taliban in Afghanistan are not merely fighting the Americans and the NATO forces. Their stated objective has been constant since they first emerged as a force in the mid-1990s, i.e. the establishment of an Islamic Emirate. This would be a universal Islamic Emirate not concerned with borders, hell bent on conquest and defeat of all those who disagree with its brand of Islam.

It is an entirely different worldview, but a view that clashes not just with the non-Muslim world but within the Muslim world as well. The TTP is their Pakistani chapter. Those geniuses who think that the Constitution of Pakistan with its Islamic provisions will be enough to mollify the Taliban’s Islamic sensibilities are living in a fool’s paradise. The Taliban look at our constitution and do not see a document promising them their version of Islamic rule but the sheer hypocrisy of the people of Pakistan. The constitution speaks of fundamental rights including freedom of religion, equality of citizenship regardless of religion or gender, freedom of expression and speech, etc. These fundamental rights are fundamentally opposed to the Taliban worldview, and in particular, their view of Islam. So are things like courts, banks, schools, etc. Our memories are short. Such an Islamic Emirate has already been tried once: the Taliban rule over Afghanistan from 1996 to 2001.

They plan on resuscitating that model and imposing it on everyone they can. So those who want to talk to the Taliban, and admittedly that is the stated position of both the PML-N and PTI, have to decide what the cost of talking to the Taliban is. Any such talks will only give the Taliban both the legitimacy and the space to regroup and strengthen. Nor is a cessation of hostilities, drone or otherwise, going to end their campaign. The Taliban did not emerge after the war on terror nor after the Afghan War. The Taliban were there in Balakot in 1831. They fought against Lord Curzon under the leadership of Mullah Pawindah. Then in 1936, they regrouped under the leadership of the Faqir of Ipi. The Faqir of Ipi, who has a road named after him in the federal capital, waged a ‘jihad’ against the Pakistani state, duly backed by the Pashtun nationalists of the time.

Today, Hafiz Gul Bahadur, Faqir of Ipi’s grandson, leads the Taliban in North Waziristan. He is considered a ‘strategic asset’ by some quarters. It remains to be seen whether he is the asset or his handlers are. The choice from a constitutional point of view is clear. Any talks with the Taliban will be unconstitutional. So long as we claim the territories of North and South Waziristan as part of Pakistan, the Taliban are to be considered rebels and enemies of the state. It is the constitutional responsibility of the state to utilise whatever means necessary to subdue them, arrest them, and try them in a court of law.

Any constitutional negotiations with the TTP would have to be within the purview of Article 256 of the Constitution, which makes all private military organisations unlawful. Therefore, the scope of the negotiations can only be limited to the terms of surrender. The state as the guardian and protector of the country cannot allow the TTP to exist as an armed group, let alone use that as a means to overturn the established constitutional order. The TTP’s actions, therefore, are not just illegal but fall squarely within the meaning of Article 6 of the Constitution. An argument then can be made that those who favour talks with the Taliban unconditionally are equally guilty of treason. -Dailytimes