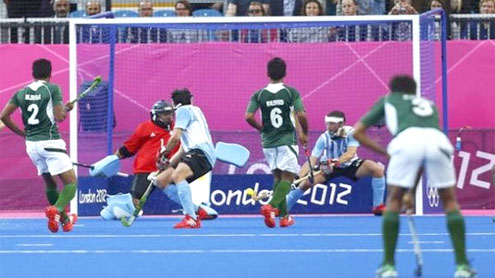 Pakistan defeated Argentina 2-0 in their second match of Olympic 2012 at the Riverbank Arena, Olympic Sports Park on Wednesday to keep their hopes alive for a place in the semifinals.

Mohammad Imran gave Pakistan lead in the 30th minute by converting a penalty corner and skipper Sohail Abbas added the second goal, also on penalty corner, in the 44th minute.Argentina had already been thrashed by Great Britain by 4-1 in their first match at the Games.The group A is headed by Australia, favourite to win the gold medal, that crushed Spain 5-0 and added six points.Great Britain are second with four points while Pakistan are third also having four points, followed by Spain and South Africa with one, and Argentina remains at the last place with no points. – Dunyanews