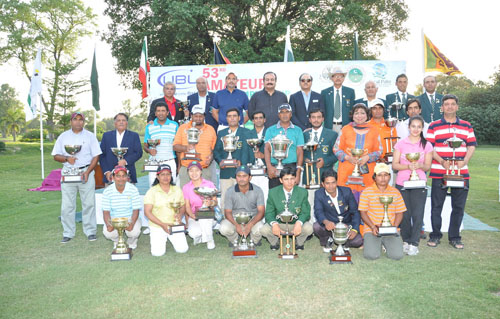 The 53rd National Amateur Golf Championship of Pakistan sponsored by United Bank (UBL)concluded at the awesome  Royal Palm Golf and Country Club Golf Course ,and after four days of gruelling golf, Zulfiqar Ali of Multan emerged as the National Champion for the year 2014.

Zulfiqar was consistent all through the four rounds and though he was ahead at the start of the final day,one did expect that he would be challenged by his nearest rivals over the final 18 holes.However no such drama took place and Zulfiqar stuck to his position as the leader as the concluding 18 holes progressed and the competition came to a close.While Zulfiqar’s quest for the title was unchecked the others were compelled to fight for the runners up position.

In the race for the runners up slot the 22 years old soldier of Pakistan Army, Naeem Khan of Abbotabad  who started golf five years back and plays with a sub standard golf set ,diverted  the competition  his way as he played with an impressive   touch birding three holes ,the 3rd,12th and the 16th.His final card of 74 gave him a four days aggregate of 302 and he ended the Championship ,five strokes behind the leader. Naeem has the temperament of a champion and if supported by the golf bodies,he could be a great future prospect.

The final standings in the individual competition were:

Pakistan team of Salman Jehangir and Taimur Khan also beat Sri Lanka to win the J.R. Jaewardne Trophy. In the Inter Association team Match Punjab team won the title while Sind was runners up. In the Ladies section, Ami Quin of Islamabad won the ladies title with scores of 82,91 and 78 and an aggregate of 251. Maryama Khan (Gymkhana) was the runners with scores of 83,83 and 87 and a total aggregate of 253. Ghazala Yasmin of Garrison  came third. Her scores were 85,83 and 86 and the aggregate was 254.

In the contest for net honors,Ana James Gill (Royal Palm) won the first net position followed by Zaib un Nisa (Royal Palm)second and Shahzadi Gulfam(Punjab Police) third. At the conclusion of the Championship,the prizes were awarded to the top performers by Rana Mashood Ahmed ,Minister for Education,Govt of Punjab. He stated that the Chief Minister ,Punjab was scheduled to grace the occasion but he had to proceed to China.The prize distribution was attended by Managers of the teams of Afghanistan, Bangla Desh, Iran, Sri Lanka, Brig(r) Nayyar Afzal, Secretary, Pakistan Golf Federation, Shahid Wahab Rao of Punjab Golf association, Asad I.A.Khan of Sind Golf, Ramzan Sheikh, Omer Mir Haroon Arshad, Parvez Qureshi and golfers.