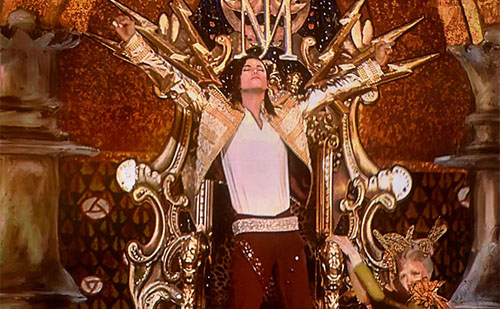 The late King of Pop Michael Jackson was back on stage — as a hologram — performing at the Billboard 2014 Music Award event Sunday in Las Vegas. Jackson, or rather his hologram, sang and moon walked to “A Slave to the Rhythm” dressed in a gold jacket, white t-shirt and red pants, along with a live band and dancers onstage.

The song was recorded in 1991 and released as part of the album “Xscape,” which includes previously unreleased Jackson tracks. Jackson´s “performance,” a tightly-held secret up to the last moment, required a year of work from 104 artists and technicians, according to organizers. Michael Jackson 50, died in June 2009 after taking an overdose of the powerful sedative propofol.

“Xscape” is his second posthumous album. Also at the event, held at the MGM Grand Hotel in Las Vegas: pop diva Jennifer Lopez and Brazilian star Claudia Litte joined rapper Pitbull to sing “We Are The One (Ole Ola),” the official World Cup 2014 song ; Shakira singing “Empire,” her latest hit; and Australian Iggy Azalea performing with former Disney starlet Ariana Grande. The naughty Miley Cyrus, on tour in London, appeared singing “Lucy in the Sky with Diamonds” — a Beatle song that was a hit long before she was born — wearing an outfit made of what appeared to be golden Christmas tinsel.