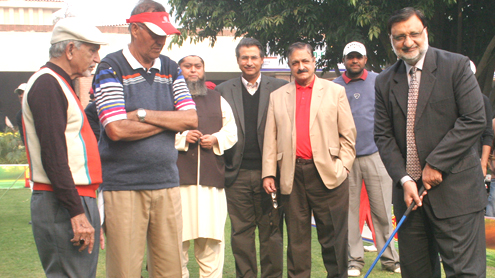 The 97 professional golfers of Pakistan competing in the 1st Quaid e Azam Open Golf Championship at the Lahore Gymkhana Golf Course and supported by Shezan International as the title sponsors, faced a real tough time on their favourite golf course and a large number of them saw their hopes of glory scattered as they could not show consistency in their shot making and putting and find their names amongst the also participated ones.

There were others however,who touched the heights of excellence and their scores are a vindication of their winning spirit,as they managed to force themselves to the higher levels of the game with barely any shortcomings.Shafiq Masih of Lahore Gymkhana is an upcoming champion of immense talent and he made his mark on the first day with a round that is oozing with birdies,nine in all,achieved through strategic shots that can simply be labelled as shots of beauty and devoid of any flukes.Shafiq birdied holes 1,6,7,8,10,11,14,15 and 18 and yes there were strokes lost on holes 4,5 and 13 but all of them due to aggresive play.His card for the day of 66,six under par got him a pat on the back from M.Sharif Janjua,the inspiration behind this championship who has promised a huge back up to support his efforts.

The other champion who touched the highest level of excellence in the round yesterday was Matloob Ahmed who matched Shafiq’s brilliance with a similar card of gross 66,six under par.Matloob is the senior of the two and currently ranked number two in national rankings.Quiet by nature he competes rather unassumingly but always makes an impact through extremely steady play.Here again he is the front runner with a score of 66,made possible by eight birdies,five of them on holes 4,5,6,7 and 8 coming in a row.Along the route of excellent play he did encounter two bogies on holes 3 and 14 but they in no way marred his brilliance.

Some others who look accomplished are Waheed Baloch(Karacki) with a round of gross 67,followed by M.Afzal(Okara),gross 68,Amjad Yousaf(Karachi),69,Latif Rafiq 70 and M.Munir at 71.Six players are placed at par 72 and they are M.Tariq,M.Nazir,M.Siddique,Shakeel Fayyaz,M.Safdar and Nisar Hussain.

Though a few shots in arrears these players look determined to challenge Shafiq and Matloob over the remaining two rounds.As for the senior professionals,they had a tough time on thursday as five of them ended the 18 holes competition at a score of gross 74 and had to go for sudden death play off.It was the experienced Manzoor Ahmed who emerged as the successful one with Shafiq Ahmed as the runners up followed by Dr.Aminurrehman and Ghulam Nabi.

Pakistan 132-0 at stumps against Bangladesh