Pakistan 132-0 at stumps against Bangladesh 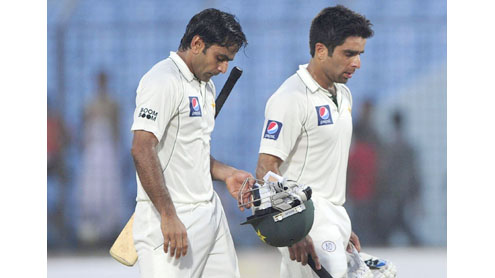 Mohammad Hafeez and Taufeeq Umar cracked unbeaten half-centuries to put Pakistan in command after Bangladesh crashed to 135 on the opening day of the first Test.

Pakistan made a strong reply to reach 132 for no loss in their first innings at stumps, with Hafeez hitting nine fours in his 74 not out and Umar seven boundaries in his unbeaten 53.Umar gave a chance in the last over of the day bowled by left-arm spinner Shakib Al Hasan, but Shahadat Hossain failed to hold on to the ball at mid-on.Left-arm spinner Abdur Rehman earlier finished with 3-9 and off-spinner Saeed Ajmal with 3-40 as Bangladesh were dismissed in just 51.2 overs after being put in to bat in Chittagong.

Pacemen Aizaz Cheema and Umar Gul also gave a good account of themsleves as they wrecked the hosts’ top order before finishing with two wickets each.“When we sent Bangladesh into bat after winning the toss, we had a plan to bowl them out at as low a score as possible,” said Rehman.“In the morning, the captain and the coach told us to maintain a good line and length and at the end of the day we got the result.”Bangladesh also had their shot-selection to blame for their dismal batting display against Pakistan’s pace-spin combination as they kept losing wickets at regular intervals.

Lower-order batsman Nasir Hossain top-scored with 41 with the help of one six and seven fours before being the last man out.Debutant opener Mohammed Nazimuddin also offered some resistance as he batted more than a session for his 79-ball 31 with the help of five fours before he was caught by Hafeez in the slips off Gul.Mohammad Mahmudullah (18) was the other batsman to reach double-figures.“We didn’t play the best cricket. It’s very disappointing as our batsmen gave away their wickets cheaply,” said Bangladesh coach Stuart Law.

“It’s not the lack of skill as we have got very talented players, but it might be a kind of mental block. I really can’t explain it. The wicket was not bad to bat on.”Pakistan, playing their first Test in Bangladesh in almost a decade, put the hosts in deep trouble in the morning when they took five wickets for 47 runs in the opening 23 overs.Cheema rocked Bangladesh with two quick wickets while Gul, Ajmal and Rehman each took one wicket after the tourists had won the toss and elected to field.

Pakistan skipper Misbah-ul-Haq opened the attack with off-spinner Hafeez, but had to rely on his fast bowlers to jolt the hosts on an easy-paced track.Hafeez gave away nine runs, including a six over long-off by opener Tamim Iqbal, in his opening three overs before being replaced by Cheema who struck with his fourth delivery.Cheema had Tamim (nine) caught behind and then had Shahriar Nafees caught by Younis Khan at second slip for no score in his next over.

Bangladesh continued to struggle against pace as they soon lost Mohammad Ashraful, caught behind off Gul after making just one run.Skipper Mushfiqur Rahim (four) was trapped leg-before in Ajmal’s first over, while former captain Shakib Al Hasan (eight) was caught at square-leg by Hafeez while sweeping Rehman.

Rubel Hossain not out 3

Mohammad Hafeez not out 74

Taufeeq Umar not out 53