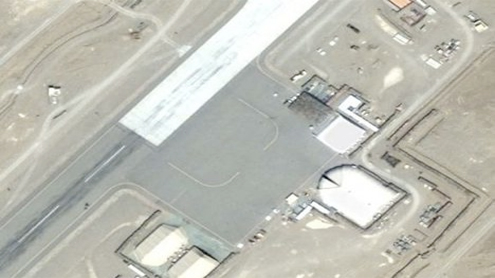 ISLAMABAD, Dec 11 (APP): Prime Minister Syed Yusuf Raza Gilani has said that the United States has vacated the Shamsi air base.  He said this in an interview with BBC Urdu Service at the Prime Minister House on Sunday.

United Arab Emirates had established Shamsi Air Base, which is located in Balochistan. The air base has been under the use of the United States for the last many years. But following NATO’s attack on Pakistan’s check post in Mohmand Agency on November 26, the government of Pakistan asked the United States to vacate the air base within fifteen days and the allotted time was to expire on Sunday.

Prime Minister said that Shamsi air base was under the control of Pakistani forces. Later on, Pakistan military also confirmed that the Shamsi air base was got vacated.Referring to ISPR, the state television said around 5 p.m.  that the last American plane carrying equipment and personnel left Pakistan today and the Pakistan army had taken over the control of the air base.In  reply to a question about Saraiki province, the Prime Minister said that Saraiki province is a long-standing demand of the people and is quite important matter, which cannot be left for the next Parliament. He said that the government would resort to the present Parliament to carve out a Saraiki province.
When he was asked about his statement in which he had said that he would prefer to resign than write a letter to the Swiss government about the NRO and whether it still was his viewpoint, the Prime Minister said that he never said anything to this effect and he was misquoted.

To a question about the killers of Benazir Bhutto not being punished, Gilani said, “I only want to tell you that high profile cases take time. Many murders have been committed in your country and nothing conclusive has happened about them. This matter is sub-judice before the court of law and we must wait for the results.”
The blocking of NATO convoys into Afghanistan via Pakistan may continue for several weeks, Gilani said.
Pakistan blocked the convoys in protest at NATO air strikes two weeks ago which killed 24 of its troops at two checkpoints on the Afghan border.

Gilani also refused to rule out closing Pakistan’s airspace to the US.Pakistani officials have confirmed that US forces have vacated an air base in Balochistan, meeting a deadline. US officials could not be reached immediately for comment about the report, which said the last flight carrying US personnel and equipment had left Shamsi on Sunday.Nato apologised earlier for the air strikes, calling it a “tragic unintended incident”, and the White House also described the deaths as a tragedy. However, asked by the BBC if he still believed the attacks had been deliberate and pre-planned, Mr Gilani replied: – Ftpapp