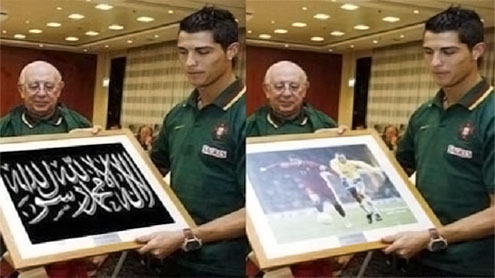 International soccer sensation Cristiano Ronaldo is no stranger to praise and admiration; as a Real Madrid star player and captain of the Portuguese national team, he is bound to attract attention no matter what he does.

However, a recent photo-shopped image of him has proven that he also doesn’t need to do anything for him to generate headlines.Living up to its “revolution exporting” reputation, Iranian media has recently posted an image which shows Ronaldo holding a picture frame with the words “There is no God but Allah,” according to news site, The Christian Telegraph.Within days, the image of the player went viral via Twitter and Facebook, as it was “positioned” to seem in support of Islam and in opposition to the recent controversial U.S.-made film, “The Innocence of Muslims.”

However, it was later revealed that the image had been photo-edited, with the real picture showing Ronaldo holding a frame with an image of himself on the pitch, not the Islamic print.“The news was spread among Iranian news media,” Saman Kamvar, the Editor-in-Chief at an Iranian Christian news agency Mohbat News – which was one of the main sources of the story – told Al Arabiya English on Tuesday.

Kamvar, who is based in Toronto, said Ronaldo’s “solidarity with Muslims” over the film had been reported, and later pulled down, by the Iran-based Young Journalists Club, closely affiliated with Iranian state media.Last Friday, Lebanese daily Al-Diyar also published the image and reported that it has been extensively shared on social media sites; whilst also suggesting that Ronaldo was acting in response to the anti-Islam film.

However, many of those who have shared or reported on the image may have not noticed it has been in the public spotlight for a while.The edited image was first shown on Arabic forums and news websites last June, noting it had been widely shared on Facebook with the claim that Ronaldo had converted to Islam.It appears the image resurfaced in the past week with a new spin; following worldwide uproar caused by the “Innocence of Muslims” film, which mocks Prophet Mohammed. – Alarabiya