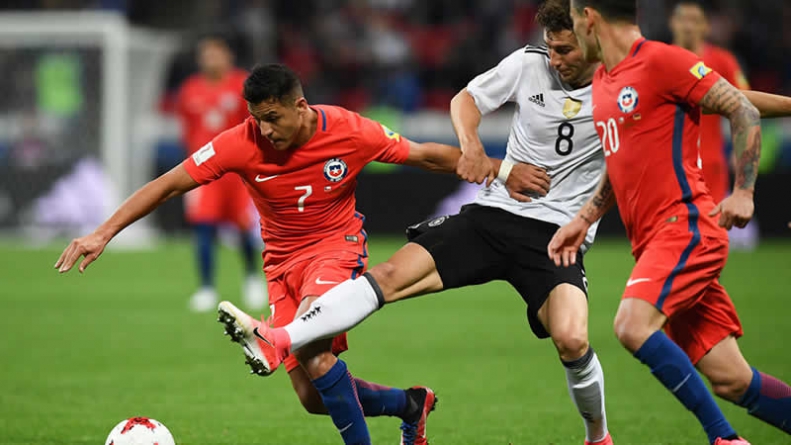 The Gunners star, the man of the match, wrote himself into the record books by capitalising on an early mistake in the German defence.

“I m very happy to be Chile s top-scorer now, our dream is to win this tournament and we feel we have a chance,” said Sanchez, who refused to be drawn about his Arsenal future. We played well in the first half, but Germany adapted very well to how we were playing. Now we need to rest up for Sunday s next game.”

Lars Stindl netted his second goal of the tournament to equalise for the world champions just before the break. We knew they would come at us with a lot of pressure and power,” said goal-scorer Stindl. But the result is not undeserved. We now know we can stand up well against great opponents.”

The result leaves South American champions Chile top of Group B on goal difference from World Cup winners Germany. With both teams on four points, three ahead of Australia and Cameroon who drew 1-1 earlier, they are in pole position to reach next week s semi-finals.

Germany play Cameroon on Sunday in Sochi while Chile face the Socceroos in Moscow. Despite leaving all his World Cup-winning stars at home, Germany s head coach Joachim Loew still managed to name four of his first-choice team.

He started with wing-backs Jonas Hector and Joshua Kimmich with Liverpool s Emre Can and Paris St-Germain s Julian Draxler, who all impressed in Monday s 3-2 win over Australia. Overall, I am very happy,” said Loew. It was a very high level match, and a tactical challenge for a young team like ours.”

Chile boss Juan Antonio Pizzi started with an experienced side, including nine of the team which beat Argentina on penalties in the 2016 Copa America final. “It was a very high-level game with two teams playing very aggressively going forward, which was very attractive for the fans,” said Pizzi.

“Both teams are very ambitious, so sometimes they neutralise each other. The result reflects the high level on the pitch.” After their opening 2-0 win over Cameroon, Chile took the lead with just six minutes gone. There was nothing on when goalkeeper Marc-Andre ter Stegen harmlessly rolled the ball out towards Joshua Kimmich.

However, Kimmich s Bayern Munich team-mate Arturo Vidal reacted fastest, deflected the ball into Sanchez s path and the striker fired home off the inside of the post. Unfortunately we went behind after a bad pass, that kind of mistake is punished, but the team s reaction was very good,” said Loew.

“As the match went on, we got forward with more and more boldness.” Despite Loew s positive appraisal, Chile could have been 2-0 when Eduardo Vargas rattled the crossbar on 20 minutes with Barcelona goalkeeper Ter Stegen beaten. Despite the early scare, Germany regained their composure and pushed forward.

When Can broke into the Chile half, his pass to the left wing found Hector, whose hard, low cross was stabbed by Stindl past goalkeeper Johnny Herrera on 41 minutes. It was Stindl s second goal in Russia, after he opened the scoring against Australia, to make it 1-1 at the break. The midfield battle intensified in the second half.

Draxler was a strong figure for the Germans in the attacking midfield role, helping out in defence and constantly looking to put Stindl or Leon Goretzka in space. Both sides had no more than half-chances to break the deadlock with the group winners to be decided by the weekend s final round.

This author has not added a biography. Meanwhile Top has contributed 2289 posts. Click here to view them.