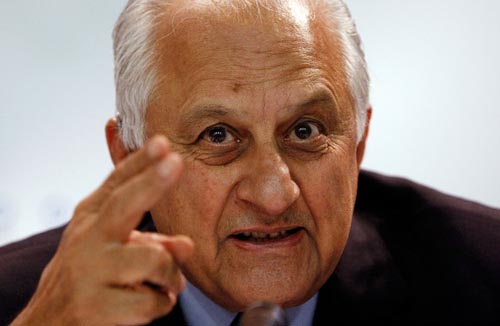 Shahryar Khan, the former PCB chief, is set to take charge of the Pakistan board once again, after he was the only person to file a nomination for the post of board chairman by the August 15 deadline. The election is scheduled for Monday and, being the only nominee, Khan is expected to be voted in unopposed.

The chairman has to be elected from among those on the PCB’s board of governors. Eighty-year-old Khan and Najam Sethi, who has headed and been ousted from the board several times over the past year, were added to the board of governors earlier this month by acting chairman Muhammad Sair Ali. The PCB recently reworked its constitution, changing the structure of the governing board and making the appointment of the chairman more democratic.

The election should, in theory at least, bring to an end the long-running uncertainty over the leadership of the PCB. There had been multiple changes of leadership in the PCB since May 2013, when Zaka Ashraf became the first elected PCB chairman. The Islamabad High Court termed those elections ‘dubious’ and Sethi was put in charge by the government. Ashraf and Sethi were then alternately reappointed and sacked from the post several times.

Shahryar Khan previous stint as PCB chief began in December 2003. Then, too, the board was in some turmoil, with allegations of nepotism and financial mismanagement rife, and he quickly took action to repair its reputation. He was in charge when Pakistan forfeited The Oval Test in 2006, after being penalised for ball tampering, and he was criticised then for not handling the players with enough authority. Previously, he had a distinguished political career, including a stint as Pakistan’s foreign secretary. -espncricinfo