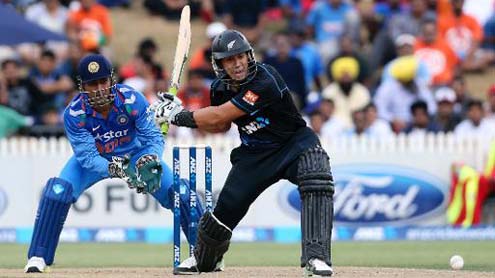 HAMILTON: India surrendered their world number one ODI ranking Wednesday when they suffered a second successive defeat to New Zealand in a rain-abbreviated game in Hamilton.

India were 20 runs short of their Duckworth-Lewis (D/L) adjusted target of 297 when further rain ended the game with three balls remaining. India’s second loss to the eighth ranked New Zealand saw them slip behind Australia on the world rankings.

A two-hour rain break during the New Zealand innings and big hitting by all-rounder Corey Anderson conspired to give India a daunting target, which they threatened to reach until the loss of Mahendra Singh Dhoni. When the skipper went for 56 in the 40th over India were 257-6 and their tailend batsmen were unable to maintain the required run rate.

New Zealand, sent into bat first, made 271-7 after rain reduced their innings to 42 overs. Anderson was the central figure in a 101-run slog in the 8.4 overs after the rain break, which under the D/L system saw India’s target scaled upwards to 297.

They made a rocky start to their reply when Tim Southee removed Shikhar Dhawan (12) and followed with the dismissal of Rohit Sharma (20) to claim his 100th ODI wicket. When Mitch McClenaghan removed Ajinkya Rahane for 36 to have India 127-3 they needed a further 170 off 18.2 overs. With Virat Kohli and Dhoni at the crease it remained possible until Southee came back for his second spell and captured the prized wicket of Kohli for 78. Suresh Raina plundered a run a ball until he went for 35 and then New Zealand claimed the break they needed when Anderson removed Dhoni.

It started a collapse that saw four wickets fall for 18 runs as India’s run chase crumbled. The New Zealand innings followed a similar pattern to their performance when they won the first ODI in Napier on Sunday by 24 runs. Opener Jesse Ryder hit a few quick boundaries before being dismissed while Martin Guptill was more cautious, reaching 44 before he was removed, leaving Kane Williamson and Ross Taylor to build the innings.

They took New Zealand to 170 for two when the rain came, and after the resumption Williamson was quickly removed opening the way for Anderson’s charge. Three weeks after he smashed the fastest ODI century in 36 balls, Anderson had the fastest 50 in his sights when he was dismissed. He belted 44 off 16 deliveries and needed a six off the 17th ball to tie the record set by Sri Lankan Sanath Jayasuriya in 1996, but was caught by Shikhar Dhawan on the boundary at long on off Ishant Sharma.

Mohammed Shami then removed Ross Taylor (57) and Brendon McCullum (duck) to put the brakes on the New Zealand charge. Shami finished with the figures of three for 55, while bowling for New Zealand Southee took four for 72. a-dailytimes