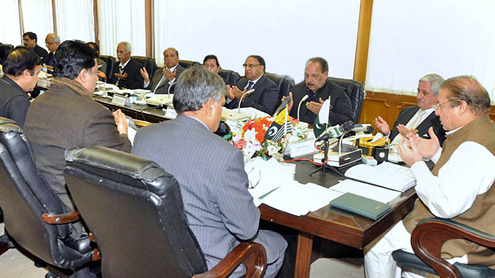 MUZAFFARABAD, Dec 3: Prime Minister Nawaz Sharif expressed his resolve here on Tuesday for early settlement of the Kashmir issue in accordance with UN resolutions and aspirations of the Kashmiris, warning that failure to resolve the dispute in a timely manner could lead to war.

“Kashmir is a flashpoint and can trigger a fourth war between the two nuclear powers at anytime,” he said in his brief address to the budget session of the Azad Jammu and Kashmir (AJK) Council.

The council, which is a product of AJK’s Interim Constitution Act of 1974, has its secretariat in Islamabad. It was for the first time its session was held in Muzaffarabad, where its Rs14.98 billion budget for the current fiscal year was approved.

Prime Minister Sharif said he had been vigorously highlighting the issue at the global level, and lately had presented the just stand of Kashmiri people at all international forums, including the UN General Assembly. “Kashmir also remained under focus during my meeting with President Barack Obama,” he said.

He said Pakistan did not want to indulge in an arms race and would implement the ceasefire along the Line of Control (LoC).Stating that AJK’s development and prosperity was his priority, he also announced a number of ambitious plans to fulfil his commitment.“I have a heartfelt attachment with Kashmir… It’s as much important for me as other parts of the country and that’s why I consider its development and prosperity my national duty.”

He said the AJK capital would be linked with Rawalpindi and Islamabad through a modern railway system. It would also be connected with Mirpur, Gilgit-Baltistan and major cities of Pakistan through a network of highways for revival of infrastructure and promotion of tourism in the region.

He said a state of the art road from Muzaffarabad to Taobutt in Neelum valley and a tunnel in Leepa valley to keep it connected with the rest of the area throughout the year would also be constructed. Airports of international standard would be built in Muzaffarabad and Rawalakot, he said. Underlining the need of launching hydroelectric projects, the prime minister said it would not only provide cheap electricity but also reduce poverty and unemployment.

“I wish the AJK government takes concrete steps for development of this region and we will extend them fullest cooperation,” he said. However, he laid emphasis on transparency and good governance in AJK, saying his government was committed to eradicating corruption and those who would go against it would be taken to task.

The prime minister also held a meeting with an eight-member delegation of the All Parties Hurriyat Conference (APHC), led by Syed Yousuf Nasim. He paid tribute to the Kashmiris for their sacrifices and struggle to achieve the right of self-determination and said: “Please convey my message to every Kashmiri that the government and people of Pakistan are with them in their just cause.” – Dawn