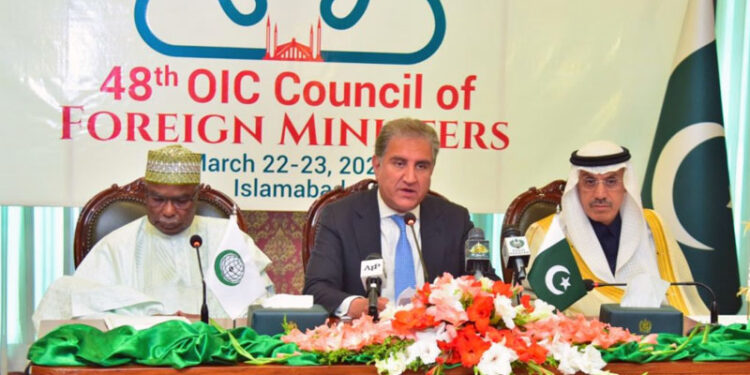 ISLAMABAD, Mar 21 (APP): The Organization of Islamic Cooperation (OIC) and Islamic Development Bank (IsDB)on Monday signed the Charter of Humanitarian Trust Fund for Afghanistan to raise donations for the people of the country suffering a humanitarian crisis.

The creation of the Fund was mandated by the 17th Extraordinary Session of the OIC Council of Foreign Ministers held in Islamabad on December 19, 2021.

Speaking on the occasion, Foreign Minister Shah Mahmood Qureshi said under the aegis of Islamic Development Bank, the platform of OIC member countries would provide humanitarian assistance to the people of Afghanistan who had been facing conflict for decades.

He mentioned that the bank had been requested to make the operation the Fund by the first quarter of 2022 and expressed satisfaction that the mandate had been fulfilled effectively.

He expressed satisfaction over the flexibility of the Charter of the fund that allowed donations from outside the system as well.

He urged the participants of the 48th meeting of the Council of Foreign Ministers to contribute to the fund for the betterment of Afghans.

Qureshi stressed the need to galvanize collective efforts at the international level to end the humanitarian crisis in Afghanistan.

He said owing to the humanitarian crisis, the people of Afghanistan needed the help and expressed confidence that the OIC countries would play a significant role in raising contributions for the fund.

The foreign minister felicitated the President, Islamic Development Bank, and his team for launching the Trust Fund well within the stipulated timeframe of three months.

He also acknowledged the efforts being made by the OIC Secretary-General and his Special Envoy for Afghanistan for galvanizing international humanitarian assistance for the Afghan people.

He emphasized the need to redouble the efforts in view of the urgent and ascendant humanitarian needs of the Afghan people.

He said the OIC remained committed to the noble cause of supporting the Afghan people and will spare no effort in implementing to the full the special resolution on Afghanistan issued by the last extraordinary session of the Council of Foreign Ministers held in December 2021 in Islamabad.

He urged the OIC member states, stakeholders, and partners to come on board and make contributions to the humanitarian trust fund for Afghanistan through the bank account reserved for this fund within the Islamic Development Bank.

President Islamic Development Bank Muhammad Sulaiman Al Jasser welcomed the signing of the Charter and stressed the need to help the people of Afghanistan in the hour of need.

He called for empowering youth and women in the OIC countries.

In addition to its continued, multi-faceted economic and developmental assistance, Pakistan has already announced an assistance package of Pak Rupees five billion for Afghanistan.