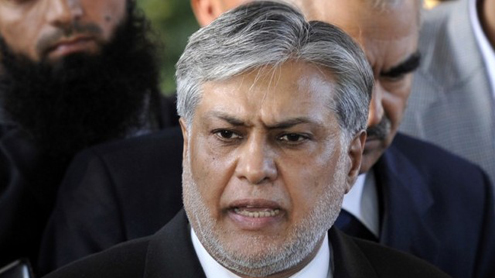 ISLAMABAD: Prime Minister Nawaz Sharif is said to be considering easing the workload on his old confidant and point man on the economy, Finance Minister Ishaq Dar.

According to sources, the prime minister has been advised by well-wishers that Dar’s health situation necessitates that his burden of managing a shattered economy be shared. Sources add that on “health grounds,” the prime minister may appoint a financially savvy PML-N leader as minister of state for finance, who will take decisions on the basis of policy guidelines formulated by Dar.

Dar was admitted to the Rawalpindi Institute of Cardiology last month after he complained of heart trouble and subsequently had to undergo angioplasty surgery. After treatment, Dar was reported to be taking rest in Punjab House and is expected to join office on Wednesday. A close aide to Dar revealed that the prime minister and his family were reportedly concerned about Dar’s health and that the issue of easing the burden on him was expected to be discussed in a family dinner at PM House on Tuesday. Dar is a close relative of the prime minister.

Recently, Dar had been overstretching himself by attending all of the prime minister’s foreign tours, except the last visit to Thailand and Sri Lanka. Dar had also been involved in decision making on all political, foreign policy and defence related matters, sources add. However, after his ailment, Dar himself expressed willingness to take on a lighter job or have his burden shared. Dar, who had been reportedly working 15 to 18 hours a day had been unable to give time to his family, especially his wife who had undergone surgery in London a couple of months back.

Sources also add that despite the IMF programme, the economic conditions of the country are worsening. While the fiscal front is stabilising, serious challenges on taxation and balance of payments remain, with the finance minister being unable to fully focus on the job during this critical juncture. Options on the table for the premier range from reassigning certain divisions from the ministry of finance, to assigning another senior leader in an advisory or minister of state capacity.

Sources add that in case the prime minister agrees to assign Dar a less stressful role, Punjab Chief Minister Shahbaz Sharif will likely take on a more important role in managing the economy. The other option under consideration is to lessen the burden of the minister by taking out certain divisions out of his control. Dar is currently minister for finance, revenue, economic affairs, statistics, and privatization, which means he is handling five important divisions in addition to advising the premier on political affairs.

Sources revealed that the prime minister was considering assigning the ministry of privatisation to Mohammad Zubair, who is currently chairman of Board of Investment, or Miftah Ismail. – Tribune