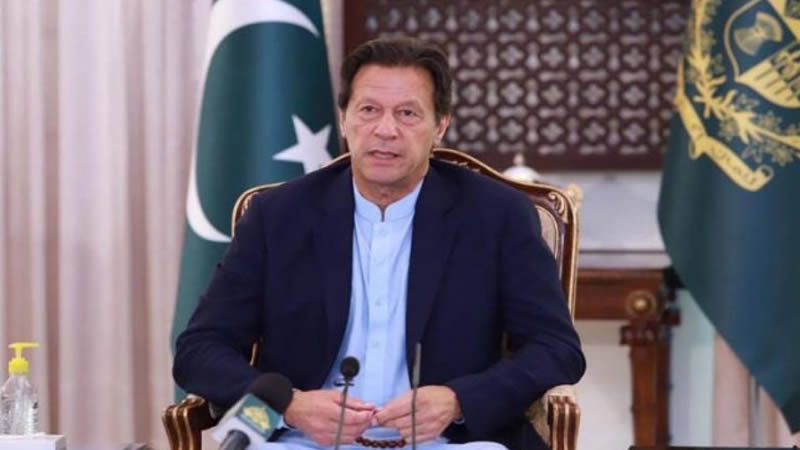 Prime Minister Imran Khan asked the nation to learn to live with the virus until a vaccine is found and exercise extra caution as the government further opened up the economy, stressing that a lockdown was not the cure for the Covid-19 pandemic.

While urging people to take responsibility and follow the standard operating procedures (SOPs), the prime minister announced that all the businesses would open except the ones that fall in the “negative list of businesses”.

“A lockdown is not a cure for the coronavirus,” the prime minister told the media after chairing a meeting of National Coordination Committee (NCC) in Islamabad. “The purpose of a lockdown is to slow down the spread of virus. It is not a solution. Let me repeat, a lockdown isn’t a solution or treatment.”

The lockdown helped reduce pressure on medical workers and hospitals, Imran said, adding that he did not want a lockdown like the one that was imposed in the country but, due to the 18th Amendment, the provinces took their own decisions.

“I would not have stopped business and construction as we had to balance the situation. I was very clear from the very first day since the virus outbreak that the situation of Pakistan is very different from China and Europe and hence strict lockdown cannot be imposed here,” he said.

“People living in DHA and other upscale neigbourhoods see lockdown from [a] different perspective from the people living in slum areas,” he said. “[But] being the prime minister, I was looking at both the perspectives,” he continued.

“We had to stop the spread of virus while considering the needs of the
marginalised segment of society,” he said, adding” “This coronavirus is not going anywhere and we will have to live with it while striking a balance between poverty and lockdown.”

In addition, the prime minister said he personally believed that the lockdown was going to affect roughly 25 million labourers whose families would starve if they did not work.

He warned that the coronavirus would continue to spread.
“The world has agreed, the richest countries have come to the conclusion that the virus will spread no matter what. Nothing can be done about it. The virus will spread and our death toll will also rise […] I have been telling you that from day one.”

Apart from the government’s efforts, Imran emphasised that the onus of curbing the spread of the virus was on the public to take precautionary measures. “If we don’t take precautions then we will continue to suffer.”

A statement issued after the meeting, stated that the NCC reviewed the Covid- 19 situation in the country in detail and “decided to continue pursuing the policy of maintaining balance between life and livelihood, while ensuring strict implementation of SOPs to contain spread of virus”.

During the meeting, the statement from the Prime Minister’s Office said: “It was decided to issue a negative list of businesses that would remain suspended in the effort to check further spread of the disease.”

However, it added, a recommended list of businesses and commercial activities, unanimously agreed upon by the federal government and the federating units, would be circulated to industry, allowing them to resume their activities.

Due to uncertainty about the life and spread of virus, it was reiterated during the meeting that “we have to learn to live with Covid, however, the SOPs would be implemented to check the spread of virus.”

Meanwhile, the prime minister announced that the government had decided that the Pakistanis stranded abroad, who are mostly the working classes and labourers would not be left unattended during these testing times and special flights would be operated to bring them back.

In the NCC meeting, Imran directed that “every effort must be made to facilitate them” in their return and to ensure that “all passengers are quickly tested” at the airports.”

In a televised address, the Prime Minister said that “I want to talk about my overseas Pakistanis. I’m worried about our labourers in the UAE and Saudi Arabia. They send valuable remittances to us.”

“We have decided that we will bring all of them back and will test them. If they test positive, we will ask them to quarantine themselves but we will now bring everyone back,” he announced.

Expressing that the tourism was season-specific in different regions and people would be greatly affected if the industry was not allowed to operate, Imran said that the tourism industry should be revived once again.

“I think that tourism should open now because tourism provides jobs to many in Gilgit-Baltistan and elsewhere,” he said, urging people to follow the SOPs outlined earlier by the government. While asking people to be a responsible nation, he said: “We have to prevent the spread of virus and also avoid poverty and misery.”

In the NCC meeting as well as the televised address, the prime minister paid special tributes to the healthcare staff for their services for saving precious human lives. Imran directed for ensuring “all possible facilitation, including provision of personal protective equipment and other facilities to the healthcare workers who are frontline soldiers in the fight against coronavirus.”

The prime minister also appreciated the use of technology and Resource Management System to ensure optimum utilisation of the healthcare facilities and providing the people with accurate information and easy access to the available health facilities.

He also lauded the Testing, Tracking and Quarantine strategy that has been developed to effectively test, track and isolate the affected patients. The NCC statement stated that the participants, including all the chief ministers, pledged their commitment to pursuing the decisions taken during the meeting of NCC and doing every bit to make the public aware of measures to deal with the Covid and fight it together at the national level.

Clashes Outside White House as US Cities under Curfew