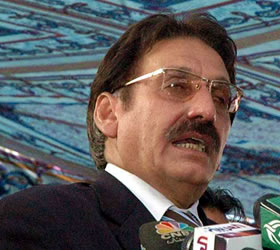 ISLALMABAD (September 08 2010): “We (the 17-member Supreme Court bench) are not sitting here to open Pandora’s box on constitutional issues; the bench has assembled merely to address the set of pleas placed before it,” observed Chief Justice Iftikhar Muhammad Chaudhry on Tuesday while hearing petitions challenging several provisions of the 18th Constitutional Amendment.

The Chief Justice made these remarks during a discussion on “inclusion and removal” of the Objectives Resolution, now part of the Constitution. Justice Jawwad S. Khawaja observed that the removal of Objectives Resolutions would lead to cause some very serious repercussions.

Advocate Salman Raja, representing members of civil society in its petition supporting the amendment, argued that the Objectives Resolution might be used as corroboration and a guide to determining the basic features, but any of its guiding features could not be made part of the constitution.

He said that the basic structure doctrine, if accepted, should be applied keeping in view the established principles of interpretation that repudiate speculative or worst case readings of the text law to arrive at a finding of invalidity. The established distinction between a law that is ex facie invalid as opposed to one that may be used in an impermissible manner may also be kept in view and applied, he added.

While defending the newly inserted Article 175A (appointment of superior courts judges) through 18th Amendment, Raja stated that “it does not abrogate or diminish the independence of judiciary.” He also stated that the formation of a parliamentary committee under Article 175-A would allow greater involvement of people in the judges’ appointment process.

In response to a question of Justice Khalilur Rehman Ramday regarding the role of Parliamentary Committee, Raja stated that it is to be seen as an attempt to allow, in a non-partisan manner, factors such as a candidate’s worldview and social philosophy to play a part in the appointment process. The parliamentary committee being more accessible to the people will allow greater involvement of the people in the process of appointment. This is consistent with the democratic principles of transparency and structured inclusion of the people in all matters of governance, he added.

He said that the new criteria for appointment of superior courts judges reflect the trend around the world to enhance involvement of non-legal persons in the decision-making regarding judicial appointments. According to him, the parliament which has passed the 18th Amendment is competent to do so and that there is no procedural infirmity in the process.

He produced copies of a book entitled “Age of Judicial Powers” and said similar process for appointment is being practiced in as many as 36 different countries of the world. According to Justice Javed Iqbal, the provision is silent over the role of the parliamentary committee. In response to the observation, Raja stated that committee’s role would be in the selection process while the judicial commission would be looking into technical expertise.

Earlier, Ahmed Raza Kasuri concluded his arguments and stated that Article 175A was in violation of constitutional provisions. In order to substantiate his point, he referred to Article 68 that reads: “No discussion shall take place in [Majlis-e-Shoora (Parliament)] with respect to the conduct of any Judge of the Supreme Court or of a High Court in the discharge of his duties.” Justice Tariq Pervez observed that if conduct of judges cannot be discussed in the parliament then how it can be done by the Parliamentary Committee in appointment of judges.

Justice Khawaja observed that “Parliamentary Committee is not answerable to Parliament and we should have to stop such things if we want to remain loyal to the Constitution.” At the end of day’s proceedings, the CJ gave an order, postponing the hearing without fixture of next date of hearing. According to him, new judicial year begins from September 14 and court has to hear cases of other litigants as well. “The office is directed to put up the matter in next week for fixation of next date of hearing,” said the order. -Brecorder