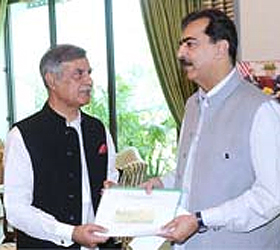 ISLAMABAD, Sep 7 (APP): Prime Minister Syed Yusuf Raza Gilani has urged for coherent strategy for distribution of relief goods which match with the needs of the flood victims.Food items, he said, have been provided in sufficient quantity in the relief camps, requiring shift in focus on shelter (tents) and vaccination to prevent outbreak of diseases.The Prime Minister was talking to Nazar Muhammad Gondal, Minister for Food & Agriculture who called on him at Prime Minister’s House Tuesday morning and presented two cheques amounting to Rs 40 million and Rs 252,000 respectively for Prime Minister’s Flood Relief Fund.

The Prime Minister asked the Minister to facilitate the farmers whose agriculture lands have been devastated in the floods.
He further said that the Federal Government in coordination with the provincial governments will provide free seeds and fertilizers to the small farmers.
The Prime Minister stressed upon the need for implementation of the decisions taken by Council of Common Interest (CCI) in letter and spirit to make the process of disbursement of the funds transparent.
Nazar Gondal apprised the Prime Minister of the rough estimates of the devastation of agriculture sector and also discussed with him the salient features of the comprehensive plans to compensate the small farm land owners.
He also apprised the Prime Minister of various relief activities in flood hit areas and the distribution of food items to various relief camps by Ministry of Food and Agriculture – APP
Previous Post