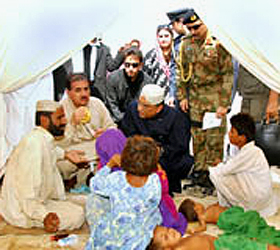 The President was also joined in his visit to Balochistan by Governor Zulfikar Magsi who had flown in Jacobabad from Quetta for the purpose.
The President was received at Dera Murad Jamali helipad by Chief Minister Balochistan Aslam Raisani, Ministers Sadiq Umrani and Maulana Wasay and Deputy Chairman Senate Jan Jamali and senior civil and military officers.
Spokesperson to President Farhatullah Babar said that the President declared Jafarabad as model district for the redevelopment and reconstruction efforts to serve as role model for implementing technology based solutions to flood issues in a planned and transparent manner with structures for monitoring and accountability.
At the briefing session in Dera Murad Jamali which was also attended by former Prime Minister Zafarullah Jamali, the President announced a grant of 50 million rupees for relief operations in Jafarabad and Naseerabad districts in addition to the 50 million provided by the government for relief goods from utility stores through the PDMA.
The President also announced another 30 million to be diverted from the development funds of the 14 provincial MPs in the province and urged other MPs also to follow suit.
Farhatullah Babar quoted the President as saying that on average 30-40 tons of relief goods are transported every day from Quetta by the federal government adding that if need be the federal supplies will be augmented further.
Bilawal Bhutto and Bakhtawar Bhutto Zardari also separately visited camps and hospital, commiserated with the victims and assured the victims that the entire nation was with them in their hour of distress.
The briefing was informed ten helicopters and 16 boats were continuously operating in the area that looked like a huge lake. So far, nearly 25,000 people have been rescued and moved to safer places by the federal govt boats and helicopters which had also provided over 25,000 tents and 20,000 blankets.
The President paid tributes to the people of neighboring districts of Naseerabad, Sibi, Bolan and Quetta for accommodating the IDPs moving from Jafarabad district as well as Sindh province.
President Zardari during visit to the Turkish Emergency hospital talked with the Turkish medics and thanked Turkey and international community for their generous assistance.
The President particularly mentioned the medical establishments provided by Turkey, Oman and another one from Germany which was on way for Osta Muhammad.
The President said that the flood devastation was too huge for any government to handle singlehandedly and called upon every citizen, every NGO and every institution to join hands. “Together we can transform the catastrophe into a great opportunity to rebuild a better and new Pakistan,” he said.
Living nations, like living individuals, bounce back in times of adversity like a phoenix from the ashes, Farhatullah Babar quoted the President as saying.
Later, the President visited Garhi Khuda Bakhsh and offered ‘fateha’ at the
mazar of Bhuttos before returning to Sukkur. The President will be shortly leaving Sukkur for Karachi – APP
Previous Post