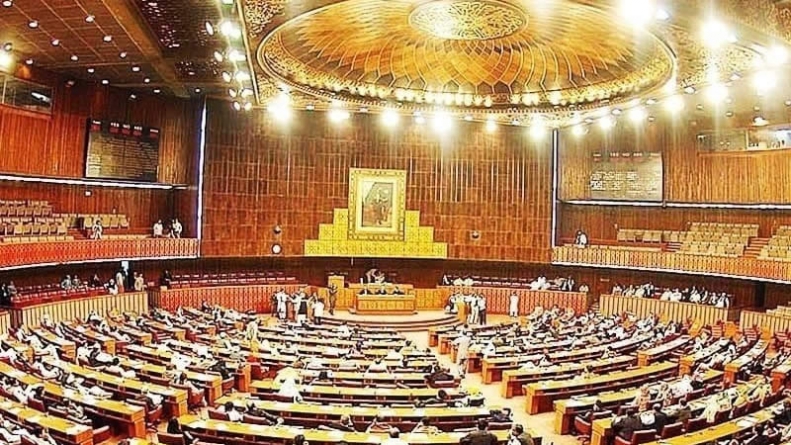 Changes allow arrest without warrants, increase punishment, give NAB a say in matters

A parliamentary committee on Monday approved amendments in the anti-money laundering bill with a majority vote aimed at allowing investigation officers to arrest accused without warrants, increasing punishment and giving the National Accountability Bureau a say in operational matters.

Amid opposition’s outcry over “bulldozing the parliamentary proceedings and norms”, the National Assembly Standing Committee on Finance approved the amendments with a majority vote of nine to six.

The committee meeting continued hardly for 20 minutes and the treasury members seemed to be in a hurry to get the bill approved without a second reading.

“The bill is approved by a majority of nine to six,” announced Faizullah Kamoka, the chairman of the committee and PTI MNA from Faisalabad – the commercial hub of the country.

The amended bill also carries serious implications for the economy and businesses, as it providers unchecked powers to investigators.

In order to ensure that the bill sails through the committee, the PTI government changed its two committee members overnight. The new members voted in favour of the Anti-Money Laundering (Amendment) Bill, 2020 without even participating in a clause-by-clause reading.

PTI MNAs Sadaqat Abbasi and Amjad Ali Khan voted in favour of the bill without actively participating in discussions. The first reading took place on Friday but the government did not go for vote, as it had lacked majority that day.

PML-N’s Ali Pervez raised the issue of casting of votes by the new PTI members without reading and understanding the bill but the chairman did not pay any heed to it.

“Bringing NAB in the AML’s ambit as an investigation agency will carry serious implications and will create more confusion, as money laundering is also part of NAB’s own law,” said former finance minister Syed Naveed Qamar of the PPP.

“NAB is one of the law enforcement agencies and if we exclude it from the list, it will result in non-compliance with the Financial Action Task Force (FATF) recommendations,” said Lubna Farooq, the director general of the Financial Monitoring Unit.

Pakistan has been placed on the grey list of countries by the FATF whose anti-money laundering and counter-terrorism financing regimes are considered deficient.

The joint group is expected to meet in September to review Pakistan’s case before it is placed in front of the FATF plenary, which is likely to take place in October.

Pakistan won a three-month further extension to complete its 27-point action plan because of the coronavirus pandemic. The extended deadline was June this year but the FATF moved it forward due to the postponement of the FATF plenary.

The opposition members were of the view that the government was overkilling the businesses and doing things, which were not even part of the FATF plan.

“The proposed bill will also carry serious implications for businesses like that of jewellers and professionals, as the government wants to end cash transactions but is not providing an enabling environment,” said Qamar.

One amendment that the government agreed to accept was that only dealers in precious metals and precious stones, including jewellers and gem dealers, with transaction value of Rs2 million or more would report it under the AML.

The key amendment in the bill was to declare money laundering a cognisable offence, which means that the investigation officers can arrest people without warrants and explanation. Money laundering is already a non-bailable offense.

According to another amendment in Section 21 (2), the court shall not take cognisance of any offence of money laundering except upon a compliant by the investigation officer or any other officer of the federal or provincial governments.

“I am shocked that the government sat on the bill for seven months and now bulldozed the proceedings to get it passed in the name of the FATF,” PML-N MNA Dr Ayesha Ghaus Pasha said.

She also criticised the FMU DG for not performing her duties professionally and becoming part of the government agenda of bulldozing the proceedings.

Earlier, the maximum punishment was five years and fine Rs5 million. The punishment has been doubled while the penalty has been increased five times.

The fine may extend up to Rs100 million in case of companies, foundations, partnerships and societies.

A key change is the insertion of Section 6A in the 2010 act that would empower the Centre to designate the government and private entities as anti-money laundering/counter financing of terrorism (AML/CFT) regulatory authorities.

The government also rejected the proposals of parliamentary oversight of the AML regime aimed at minimising the chances of abuse by the government and the investigation agencies.

The government has made Inter-Service Intelligence agency, Directorate General of Military Operations, NAB and other agencies part of the National Executive Committee on AML and General Committee, which will oversee operations of the AML regime.

The bill will now be tabled before the National Assembly for a vote where the government has a majority.