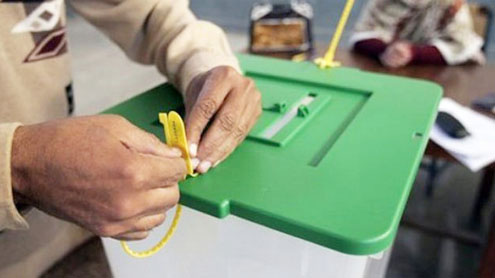 ISLAMABAD: Just a couple of days are left for the closure of canvassing for by-polls but the election campaign by various candidates in the arena for NA-48, one of the constituencies in the federal capital, could not pick up momentum.

Normally the election campaigns in the by-polls remain lacklustre as compared to the public participation and excitement in general elections, but the continuous wavering of ruling Pakistan Muslim League (Nawaz) in awarding of party ticket till Thursday last played a major role in further dampening of the election campaign in this constituency.Since the carving out of this constituency as a result of bifurcation of the sole federal capital National Assembly constituency in 2002, three elections have bene held and the seat was won by Jamaat-I-Islami, Paksitan Muslim League (Nawaz) and Pakistan Tehreek-I-Insaf in 2002, 2008 and 2013 general elections respectively. However, previously Federal Capital remained the stronghold of Pakistan Muslim League (Nawaz).

In last general elections PTI Makhdoom Javed Hashmi won this seat with huge lead of over 20,000 votes and as he had vacated this seat and retained his hometown constituency in Multan, the seat fell vacant for another showdown between the major political players but the main contest is again likely between the ruling Pakistan Muslim League(Nawaz) and Pakistan Tehreek-I-Insaf with both the parties landing in the arena with their own advantages and disadvantages.The major advantage to PML-N candidate Ch Ashraf Gujjar is that his party is holding reins of power both in Punjab and at Centre, which would definitely influence voters for obvious reasons.

On the other hand, the confusion about the PML-N candidate till Thursday last had caused irreparable damage to Gujjar, who failed to fully mobilise his voters in the constituency, particularly in the rural areas falling in its limits, where he could not have launched his campaign effectively due to uncertainty shrouding his candidature.On the other hand, the local leaders from the area were not wholeheartedly extending support to him because they were not happy with the decision of awarding party ticket to an outsider ignoring their sacrifices for the party.

Although on the direction of party high command Anjum Aqeel Khan was supporting Gujjar, yet majority of his supporters are not going to vote for PML-N candidate and would either stay away from the electoral process or vote for some other candidate in the arena.
Gujjar claimed to have the backing of the middle-class people of the federal capital mostly inhabiting I and G sectors while he also lays claim on rural voters in this constituency which traditionally remained mainstay of the PML-N.

Pakistan Tehreek-I-Insaf has brought Asad Umar to contest on the seat vacated by his party stalwart Hashmi. But as in case of PTI too the local leaders were ignored while awarding party ticket so they were also annoyed and the reflection was visible in lacklustre campaign of PTI. The PTI campaign picked up a little when Imran Khan led the rally of Asad Umar a couple of days back and would likely address a big public rally most probably on the closing date for election campaign.

But generally the political analysts place Asad Umar in advantageous position because of the door-to-door campaign he was running for the past well over a month.The withdrawal of Jamaat-I-Islami candidate Mian Aslam would also go in favour of Asad Umar and for past few days he (Mian Aslam) was canvassing for the PTI candidate and also addressing his corner meetings.The PTI is mainly banking on the urban voters, which had helped Hashmi won the seat with huge margin in general elections.

Pakistan People’s Party has repeated its candidate and Faisal Sakhi Butt is in the arena but would unlikely leave any significant impression on the elections.Besides these main players, some half a dozen candidates were in the arena as an independent candidates but would hardly impact the results of the elections and the main contest would be between PML-N and PTI candidates. – Nation