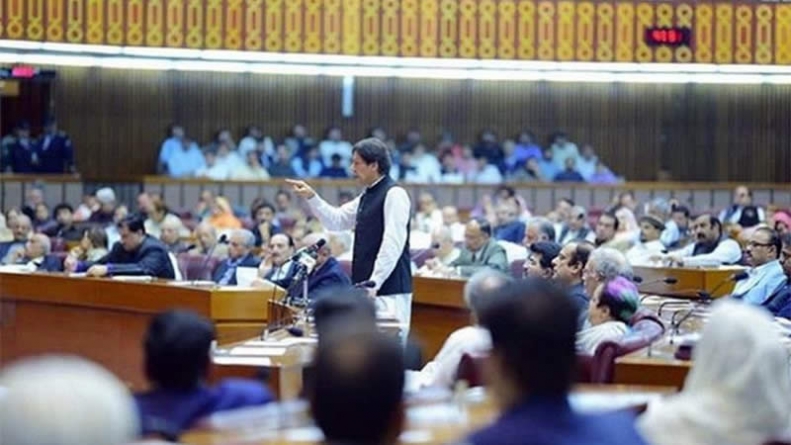 As a joint sitting of parliament in a unanimous resolution on Thursday reiterated its complete rejection of India’s illegal and unilateral action of changing the special status of occupied Kashmir on Aug 5 last year, Prime Minister Imran Khan lauded the UN Security Council for its latest meeting on the disputed matter.

In a series of tweets, Mr Khan said: “I welcome the UNSC for again taking up the Jammu & Kashmir dispute, which has been on its agenda for over 70 yrs. The UNSC, under the UN Charter, not only has the responsibility for maintaining international peace & security but also of ensuring implementation of its resolutions.

“We thank the Council members who expressed concern over the deteriorating human rights & humanitarian situation in IIOJK, advised against escalation of tensions, underscored the need for respecting international law & called for a peaceful resolution of the dispute.

“Pakistan’s position remains clear & unambiguous. The J&K dispute must be resolved in accordance with the relevant UNSC resolutions granting Kashmiri people the right of self-determination under a free & fair plebiscite.

“Pakistan will continue to extend all possible support to the Kashmiri people until they secure this inalienable right.”

The parliament condemned continued human rights violations by India aimed at perpetuating its inhumane occupation of Jammu and Kashmir.

It emphasised that the illegal Indian action was a blatant violation of the relevant United Nations Security Council resolutions, bilateral agreements and the precepts of international law.

The parliament denounced the Bharatiya Janata Party’s government for taking advantage of the world’s preoccupation with the Covid-19 pandemic to introduce new domicile rules in occupied Kashmir in an attempt to illegally change the demographic structure of the region to advance its Hindutva agenda.

It declared that the illegal steps to turn the Muslims into a minority in India’s only Muslim-majority area were in clear violation of the UN resolutions, bilateral agreements and international law, including the 4th Geneva Convention.

The parliament condemned extra-judicial killings of the Kashmiri youths in fake encounters and cordon-and-search operations as well as arbitrary arrests and detentions of senior Kashmiri leaders and activists.

It also condemned the refusal by India to hand over mortal remains of the martyrs to their families for burial, and burning and looting of houses of Kashmiris to inflict collective punishment on the communities and neighbourhoods.

The parliament deplored that the Indian occupation forces had partially or completely blinded more than 11,000 Kashmiri civilians, including women and children, through the deliberate use of pellet guns.

It denounced that to divert attention from grave human rights violations in occupied Kashmir, the Indian occupation forces had been continuously targeting civilian populated areas along the Line of Control and the Working Boundary with artillery fire, high-calibre mortars and automatic weapons, committing more than 1,800 ceasefire violations this year alone that resulted in 14 martyrdoms and serious injuries to 138 innocent civilians.

The parliament appreciated strong statements from world leaders of support on the Kashmir dispute and for seeking its resolution in accordance with the UN resolutions.

It underscored that Jammu and Kashmir was an internationally recognised dispute and the longest outstanding item on the agenda of the UN Security Council and categorically stated that the “illegal Indian steps do not and cannot alter its disputed status”.

It commended the three discussions on the Kashmir dispute in the Security Council after a gap of more than 55 years; the two reports on the issue by the Office of the High Commissioner for Human Rights; and the consistent support of the Organisation of Islamic Cooperation.

It reaffirmed the firm resolve of the people and the armed forces of Pakistan to thwart any act of aggression resolutely and effectively.

The parliament called upon the international community to use all tools at its disposal to hold India accountable for its illegal and unilateral actions and human rights violations against the Kashmiri people and force it to allow international media, humanitarian organisations and independent observers to visit occupied Kashmir to independently verify reports of abuse, violations and use of excessive force.

It urged the UN Human Rights Council to constitute a commission of inquiry to investigate gross and consistent human rights violations in occupied Kashmir.