by Top
in National Assemblies
0 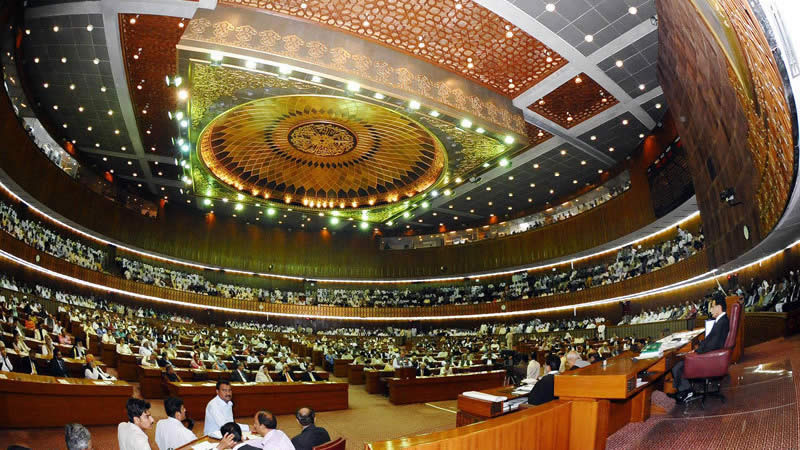 With a much-anticipated election just around the corner, the Pakistan Tehreek-e-Insaf seems poised to emerge as the largest party in the Senate. But the 28 seats it is likely to end up with will not be enough to dominate the 100-member upper house and the ruling party can expect encounter stiff resistance to persist as it tries to get its bills to sail through.

Half of the Senate’s current members will complete their six-year term on March 11, leaving 48 seats up for grabs. While the upper house currently has a total of 104 members – half of whom retire every three years – the merger of the erstwhile Federally Administered Tribal Areas with Khyber-Pakhtunkhwa means the four seats reserved for the former will retire with the Senators who hold them.

Although PTI is expected to secure a majority in the Senate following the upcoming election, full control of the house will likely elude it. With a projected 19 seats, the Pakistan People Party is expected become the second largest party, followed closely by the Pakistan Muslim League-Nawaz with 17 seats. This means two of the PTI’s staunchest political opponents and key constituents of the anti-government Pakistan Democratic Movement will almost match the ruling party in the upper house.

Even if it counts on its allies, which include the Balochistan Awami Party that is likely to end up with 13 seats, the numbers game in the Senate is likely to be more or less even with the combined opposition. Although this will prevent the latter from bringing in its own Senate chairman, it will still mean the PTI will have to convince both its allies and the opposition to pass even the simplest legislation.

Since the electoral college for the Senate elections comprises existing members of the National and provincial assemblies, results usually boil down to respective parties’ current presence in the legislative bodies. However, rare is at may be, there have been instances in the past where certain assembly members have voted against their party compatriots.

Based on its current numbers in the National and provincial assemblies, PTI is likely to retain the seats of its retiring senators and win twice as many new ones. The party currently has 14 seats in the Senate, seven of which will be vacated on March 11.

In the upcoming election, PTI expects to gain 10 senators from its home ground of K-P, another six from Punjab, two each from Sindh and Islamabad, and one from Balochistan. In total, the ruling party will likely end up securing 21 seats, bringing its total strength in the upper house to 28.

PPP, meanwhile, is expected to lose two seats once eight of its senators retire. All of them are from Sindh and the party is expected to retain only five seats following the upcoming election. Thus, its strength in Senate will reduce from 21 to 19.

It is PML-N, however, which seems poised to suffer the biggest blow. More than half of the PML-N’s 29 senators – 17 to be precise, all from Punjab – will retire come March 11. Based on its current strength in other assemblies, it is expected to regain only five seats. PML-N’s overall strength, thus, will be reduced to 17 as well, forcing it to cede the crown of the largest opposition party in Senate to PPP.

On paper, the third key PDM constituent, Jamiat Ulema-e-Islam Fazl, is expected to marginally improve its position following the Senate election. Although two of its senators, one from K-P and the other from Balochistan, will retire on March 11, the party is expected to retain both seats and gain an extra one. But following the rift that emerged in the party, the JUI-F could yet suffer some shock.

As for the rest, the Muttahida Qaumi movement is expect to lose its Senate strength by two as four of its five senators are retiring and it is only expected to regain two seats. Following the retirement of its amir Sirajul Haq from the Senate, Jamaat-e-Islami will have only one member in the upper house.

If the Grand Democratic Alliance secures one seat from Sindh, it will double its strength to two. The Balochistan National Party-Mengal, meanwhile, is expected to secure two new seats, as are the National Party and the Pashtunkhwa Milli Awami Party.

Since the final numbers will emerge only after the election results are announced, political experts project that the opposition parties’ newly formed alliance – Pakistan Democratic Movement (PDM) – could win an additional seat in Balochistan and Khyber Pakhtunkhwa. With the support of ANP, PPP and PML-N, one seat can be won in K-P and n Balochistan through the MMA, BNP-M, PkMAP and ANP coalition.

Since securing an overwhelming win in the 2018 elections, the PTI government has been eager to hold Senate elections early through and through an open vote. While the ruling party has claimed that the latter would promote transparency, the PDM has been sternly opposed and termed it an attempt by the government to prevent its lawmakers from switching loyalties.

Subsequently, the government presented a bill seeking to amend constitution for an open vote in the Senate elections. Though, it was passed from the standing committee concerned, the National Assembly witnessed a noisy session when the government presented the 26th constitutional amendment bill in NA. The bill has yet to be passed by the assembly.

On early elections, the Election Commission of Pakistan clarified that according to Article 224(3) of the Constitution, elections cannot be held before the 30-day period on seats that will fall vacant after the expiry of the term of the members of the Senate. “This means elections on vacant Senate seats cannot be held before February 10, 2021,” it had stated; leaving the government’s hope of seeing the elections happening in February alive without giving any surety. The ECP had also suggested that the Senate elections could take place in the first week of March.

The federal government has also sought the Supreme Court’s opinion on whether the Senate elections could be held through open ballot by amending the Election Act 2017 that requires simple legislation. The presidential reference is being heard in the apex court pending a decision.

Seeing the strong resistance from the opposition in the NA, President Dr Arif Alvi on February 6 signed off the Election Amendment Ordinance, 2021, under which upcoming Senate elections could be held through open balloting.

The ordinance, which amends sections 33, 86 and 122 of the Election Act 2017, was announced with immediate effect. Its enforcement will be subject to the outcome of a presidential reference pending before SC.

The opposition has engaged the government in the legal battle as well, arguing that the Supreme Court could interpret the constitution but not make a new law.