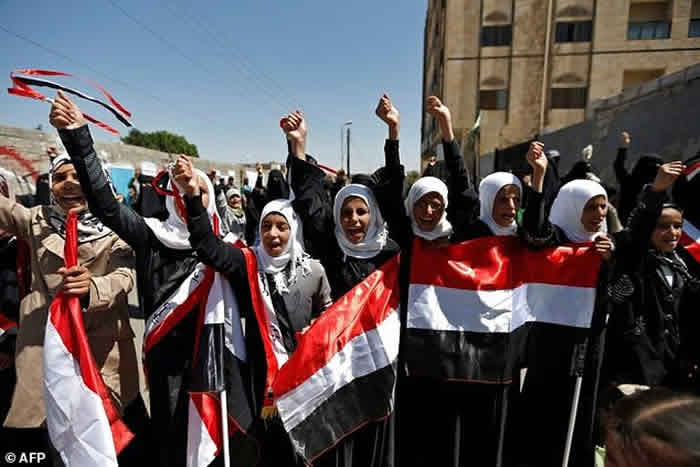 Dozens of women staged a sit-in outside UN offices in Yemen’s capital Tuesday demanding an end to the country’s war that has left millions displaced and at risk of famine.

Girls and women of all ages carried the red, white and black Yemeni flag as they sang the national anthem, some with their babies wrapped in the flag or sporting nails painted in national colours.

“We are here to speak for the women of Yemen who are calling for peace — true peace, peace for us and our children,” read a statement in Arabic distributed by protesters at the sit-in, which is scheduled to last three days. “We watch as our families are rendered homeless, our men are murdered, our homes destroyed and our children’s futures are lost before our very eyes,” it added. “We watch as our society is destroyed, as most of our people are driven below the poverty line.”

Women at the sit-in carried signs calling for the lifting of an air and naval blockade imposed by a Saudi-led Arab coalition on areas controlled by anti-government rebels in Yemen. Other signs demanded the UN press Saudi Arabia and its allies to allow the delivery of food and medical aid into Yemen, which UN aid chief Stephen O’Brien has described as the “largest humanitarian crisis in the world”.

Protesters erected colourful tents on Tuesday afternoon as they prepared to spend their first night outside the Sanaa offices of the United Nations. The conflict in Yemen has left more than 7,400 people dead and 40,000 wounded since the Saudi-led coalition intervened on the government’s side against Iran-backed rebels in March 2015, according to UN figures.

In the past two months alone, more than 48,000 people have fled fighting in the Arab world’s poorest country, O’Brien has said. Two-thirds of Yemen’s population, or 18.8 million people, are currently in need of assistance and more than seven million have no regular access to food. The UN has warned the country faces a serious risk of famine.