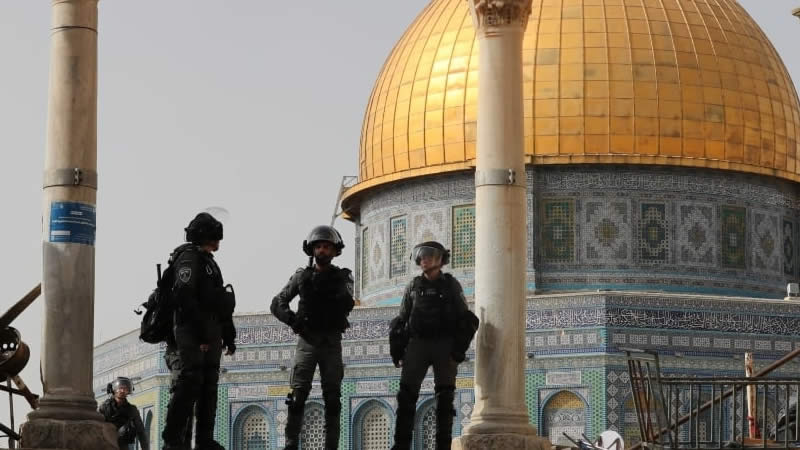 “There are hundreds of people injured from the attacks” and about 50 of them were hospitalised, the Red Crescent said in a brief statement to journalists.

Tensions in the city were particularly high as Israel was marking “Jerusalem Day”, its annual celebration of the capture of East Jerusalem, and the walled Old City that is home to Muslim, Jewish and Christian holy places, in a 1967 war.

Al Aqsa, Islam’s third holiest site, has been a focal point of violence in Jerusalem at the height of the month of Ramazan.

In an effort to dial down tensions, Israeli police said they had banned Jewish groups from paying Jerusalem Day visits to the holy plaza that houses Al Aqsa, and which Jews revere as the site of biblical Jewish temples.

Police were also considering whether to reroute a traditional Jerusalem Day march in which thousands of Israeli flag-waving Jewish youth walk through the Old City’s Damascus Gate and the Muslim Quarter.

Live video showed Palestinians hurling rocks at police in riot gear on Al Aqsa’s stone-strewn plaza and police firing stun grenades. The skirmishes appeared to be less fierce than the violence late last week. There were no immediate reports of casualties.

Police said they had deployed thousands of officers in Jerusalem streets and on rooftops to keep the peace.
Planned evictions

Tensions have also been fuelled by the planned evictions of several Palestinian families from the Sheikh Jarrah neighbourhood in East Jerusalem.

Israel’s attorney general secured a deferment on Sunday of a Supreme Court hearing on Monday in the long-running evictions case that had threatened to stoke more violence.

A lower court had found in favour of Jewish settlers’ claim to the land on which the Palestinians’ homes are located, a decision seen by Palestinians as a bid by Israel to drive them from contested Jerusalem.

US National Security Adviser Jake Sullivan expressed “serious concerns” about the situation in Jerusalem, including the potential evictions, in a call with his Israeli counterpart on Sunday.

Palestinian militants in the Gaza Strip, who have condemned Israeli actions in Jerusalem, fired at least three rockets towards Israel on Monday, after launching four projectiles a day earlier, the Israeli military said.

No casualties or damage were reported.

Israel responded to Sunday’s attack with tank fire against positions belonging to Hamas, the militant group that runs the Gaza Strip.

Israel views all of Jerusalem as its capital, including the eastern part that it annexed in a move that has not won international recognition.

Palestinians want East Jerusalem to be the capital of a state they seek in the occupied West Bank and Gaza.