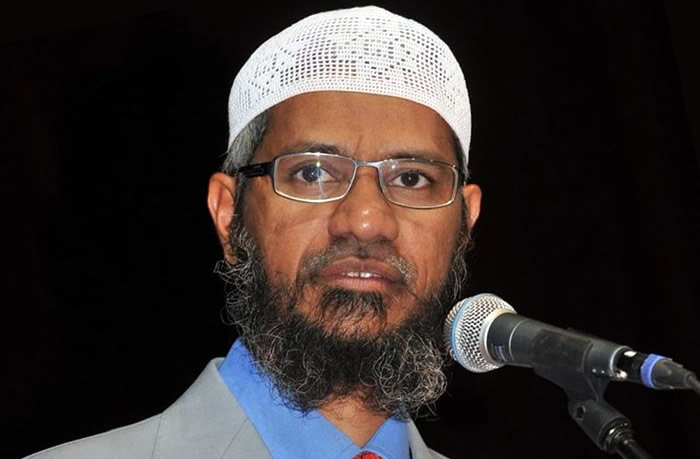 An Indian television preacher who has called the 9/11 attacks an “inside job”  received one of Saudi Arabia’s most prestigious prizes on Sunday, for “service to Islam.”

Zakir Naik, president of the Islamic Research Foundation in India, was one of five recipients of the King Faisal International Prize from Saudi Arabia’s King Salman during a ceremony at a luxury Riyadh hotel.

The annual prizes are a project of the King Faisal Foundation, established in 1976 by the children of King Faisal bin Abdul Aziz who died in 1975. Naik was honoured for being one of the most renowned non-Arabic speaking promoters of Islam. He founded the Peace TV channel, billed as the world’s only channel specialising in comparative religion. It has an estimated English-language audience exceeding 100 million, according to his award citation.

“Islam is the only religion that can bring peace to the whole of humanity,” he said in a video biography aired at the ceremony. In a July 2008 Peace TV broadcast Naik suggested that Al-Qaeda was not responsible for flying hijacked airliners into New York’s World Trade Center on September 11, 2001, killing almost 3,000 people. “Even a fool will know that this was an inside job,” he said in the video, claiming then-President George W. Bush was behind the attacks.

In 2010 Naik was reportedly barred from entering Britain after the Home Secretary cited “numerous comments” which showed his “unacceptable behaviour”. Naik told Sunday’s ceremony that he would donate all of his $200,000 prize money to Peace TV. The other prize winners were: In Islamic studies, Saudi Arabia’s Abdulaziz bin Abdulrahman Kaki for his research on the cultural heritage of the Muslim holy city of Medina.

In medicine, Jeffrey Ivan Gordon of the United States, whose research has enhanced understanding of diseases such as obesity, which is a growing problem in Saudi Arabia. In science: Michael Gratzel of Switzerland for his development of solar cells, and co-winner Omar Mwannes Yaghi of the United States for his work in the new field of metal organic frameworks. (AFP)