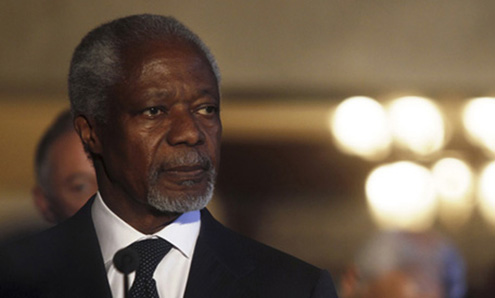 TEHRAN: Former UN chief Kofi Annan, head of a group of ex-global leaders known as the Elders, Sunday started a visit aimed at boosting dialogue between Iran and the international community.Annan is accompanied by Martti Ahtisaari, a former president of Finland, South Africa’s Nobel Peace Laureate Desmond Tutu and Mexican ex-president Ernesto Zedillo. The group, formed in 2007, is made up of 12 global leaders who try “to promote peace, justice and human rights,” according to its website.

It said the group will hold private meetings with Iranian officials but did not give further details. Iranian media reported they would start the three-day trip by visiting the mausoleum of the late Ayatollah Ruhollah Khomeini, founder of the Islamic republic.

The group sees “recent positive developments as a historic and strategic opportunity to end decades of animosity between Iran and the international community,” the website said in statement on Saturday.

But it added “trust will only be built slowly, through continued goodwill and reciprocal action.”During the visit, the Elders “will exchange ideas with the Iranian leadership about peaceful ways of addressing conflict and healing sectarian divisions in the region.”Iran is a staunch supporter of Syrian President Bashar al-Assad’s regime in its almost three-year-old bloody conflict against rebels.

Iranian Foreign Minister Mohammad Javad Zarif said on Saturday that he would host the delegation. President Hassan Rouhani won last year’s presidential election with promises of a diplomatic opening to the West.

Iran and major world powers clinched a historic nuclear deal in November, when Tehran agreed to curb parts of its atomic programme for six months in exchange for modest sanctions relief and a promise by Western powers not to impose new sanctions. -Dawn