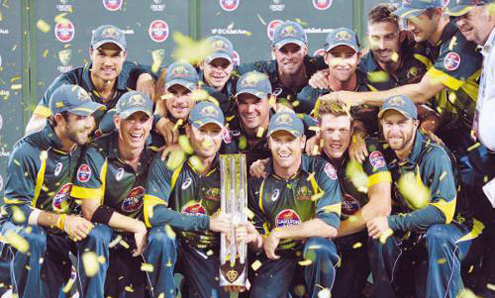 ADELAIDE: England wilted under pressure as Australia edged home by five runs in a low-scoring thriller in Adelaide on Sunday to win the five-match series 4-1.

Set a meagre 218 to win their second match on the tour, England looked on course while Joe Root (55) and Eoin Morgan (39) were at the crease, having added 64 runs for the fourth wicket. England needed another 64 at that stage with seven wickets in hand but Morgan’s dismissal, while trying to loft James Faulkner over the infield, turned the game in Australia’s favour.

Root also fell to Faulkner two overs later as Australia tightened the screws. The needless run-out of Tim Bresnan (13), to a direct hit from Glenn Maxwell, complicated things for the visitors and the unfortunate stumping of Ravi Bopara (25) in the penultimate over put paid to England’s hopes. Bopara was England’s best bet with nine required off the same number of deliveries but the batsman was given out stumped when the ball ricocheted off wicketkeeper Matthew Wade onto the stumps with Bopara’s feet barely in the air. Watson came on to bowl the last over with England needing eight but the all-rounder dismissed last man James Tredwell caught behind from the fourth delivery.

Mckay and Nathan Coulter-Nile took three wickets apiece as the visitors were shot out for 212. Earlier, Stuart Broad and Ben Stokes shared six wickets as Australia struggled for momentum after captain Michael Clarke won the toss and opted to bat. Broad struck early for England as Australia lost four wickets inside the first 20 overs and were forced to consolidate on a sluggish Adelaide Oval pitch.

Clarke (eight) and Shane Watson (zero), rested during the one-day series for their Ashes workload, returned to the team on Sunday but had a forgettable outing with the bat. It was left to Bailey to resurrect the innings for Australia and he did the repair job first with a 48-run stand with Glenn Maxwell (22) for the fifth wicket and then added 55 for the sixth with Matthew Wade (31). Bailey fell trying to clear Stokes over the infield. Fast bowling partners James Faulkner (27) and Nathan Coulter-Nile (15) added some quick runs towards the end to take Australia past 200.