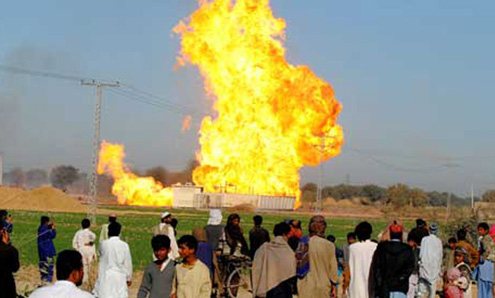 DERA BUGTI: A pipeline, carrying natural gas, was blown up in Balochistan’s Dera Bugti district late on Sunday disrupting the gas-supply to the Sui plant from well number 15 in Pir Koh gas field.

A Levies official, not wanting to be named as he was authorised to speak to the media, said that unidentified miscreants had planted an explosive device on the 16 inch-diameter pipeline in Pir Koh gas field.

The device detonated with a huge bang causing extensive damage to the gas pipeline, he added.The supply of natural gas from well number 15 to the Sui plant was suspended as a result of the blast.

Authorities said the repair work of the pipeline would begin once a security clearance was granted. Sabotage of gas pipelines is a characteristic tactic of tribal militants and is frequently witnessed in Balochistan. However, the province also suffers from attacks carried out by Taliban militants.

A similar attack was carried out last week, where the pipeline supplying natural gas to Sui purification plant from well number 41 of Pir Koh gas-field was blown up. Earlier on Jan 11, an 18-inch Sui gas pipeline was blown up by unknown miscreants in the Dera Murad Jamali area of Balochistan. -Dawn