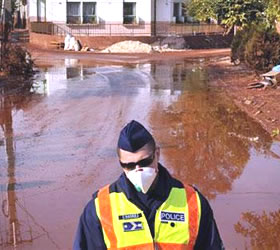 Hungarian authorities released on Wednesday the director of an alumina plant that flooded several towns with toxic waste, killing nine people, injuring at least 100 others. Government officials say production at the metals plant will resume by Friday, despite concerns among local residents about more flooding.A judge dismissed government demands that the head of the plant, Zoltan Bakonyi, be charged with negligence after some 800,000 cubic meters toxic mud spilled from the factory’s reservoir, devastating several villages and towns.Bakonyi’s attorney Janos Banati says prosecutors failed to argue that his client had not prepared emergency plans for accidents like this one. But, he says, prosecutors will likely appeal the ruling.
Bakondi says authorities already have switched on the factory’s heating system, noting that “[l]etting it cool off too much would have caused damage worth billions of forints.”Hungarian Prime Minister Viktor Orban says resuming production at the plant is necessary to generate revenue to compensate victims of the disaster. Mr. Orban has also visited the devastated village of Kolontar.

Daniel Rad, a young Roma man, is helping with the cleanup effort. “I came here to help,” he says, as heavily armed policemen watch nearby. “I do this for free,” he adds, “because I believe it’s important to save this village.”A horse breeder in Kolontar, Sandor Ferenczi, says it will be difficult to rebuild his life.He says that he will never forget what happened last week. Ferenczi says that after he picked up his son from school, he saw an ocean of red sludge engulfing their home. He recalls that the prime minister says that a part of the village will not be rebuild, but instead become a memorial to the victims.
There are concerns of more toxic flooding after cracks were found in another part of the factory’s reservoir.

Authorities are building an emergency dam to prevent the flood of more toxic waste, a byproduct of bauxite, which is used to manufacture aluminum.The sludge has made its way to one of Europe’s main waterways, the Danube River. Environmentalists warn that it has the potential to contaminate drinking water supplies for millions of people downstream – Voanews

After a final day together, miners begin to disband