After a final day together, miners begin to disband 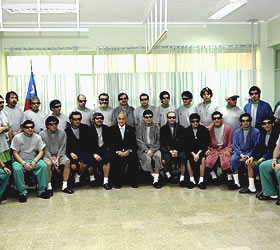 After a final day together, in the relative comfort of the regional hospital here, three of the 33 miners who lived trapped together for more than two months were discharged Thursday night, CNN Chile reported.CNN’s sister network identified them as Juan Illanes, Edison Pena and Carlos Mamani. It aired video of several men and what appeared to be their families inside a red van departing the hospital grounds.Illanes is a 52-year-old electrical mechanic and military retiree; Pena, 34, is an Elvis Presley fan; and Mamani is a 23-year-old Bolivian who started working in the mine five days before the collapse.Mamani was the only miner recognizable in the network’s video. He was still wearing the dark sunglasses that he and the other miners were wearing when they surfaced Wednesday. Hospital officials had predicted the departure of three miners earlier in the day, but had made no official announcement as of late Thursday.Their departure marked the beginning of the end of a frenzied day of joy that erupted Wednesday as the men — who spent 69 days trapped in a collapsed mine in Chile — were rescued.They spent Thursday meeting with President Sebastian Pinera and undergoing tests. A few underwent treatment, a hospital official said. All were reportedly in relatively good health.Earlier in the day, Copiapo Regional Hospital Subdirector Dr. Jorge Montes said there would be no restrictions on the activities of the three men.
“Friday, probably many more miners are to be released,” he added. A patient with eye problems and another with respiratory complications have both responded well to treatment, he said.

Asked whether they would all be released before Monday, Montes answered, “Yes, it could be this weekend — unless something happens.”Montes said the psychological impact of the men’s months of stress is impossible to predict.”Eventually, all could exhibit some post-traumatic stress disorder, but some people can resist it better than others,” Montes said.Dr. Paola Neumann, director of health services at the hospital, said, “The probability is that all 33 are going to be home by Sunday.”Meanwhile, the government shifted its attention to protecting the miners and the rest of the country’s work force.

After visiting the hospital, Pinera told reporters he could not guarantee against future accidents, but vowed that the government will tighten oversight of workplaces.
“This we can guarantee: Never again in our country are we going to permit work in such an unsafe and inhumane environment as the San Jose mine,” Pinera said, adding that other mines fall into this category. In a few days, the government will announce a new pact with the country’s work force that would result in a change in labor laws, Pinera said.”We are going to create a culture of respect for life, health and dignity of our workers,” he said.Early Thursday morning, Pinera placed a metal cap on top of the hole through which the 33 miners emerged, one by one, marking the end of a rescue operation that captivated much of the globe.

“Today, Chile is a country much stronger and more united, and a country much more respected in the world,” Pinera said, adding that Thursday was more calm and tranquil following the high suspense of the rescues.

Read special coverage of the Chile mine rescue

Officials also announced that two of the three tunnels that were drilled in alternate attempts to reach the miners — known as Plan A and Plan C — will be permanently sealed. The hole that reached the miners, Plan B, will be sealed temporarily while officials decide whether to close it for good, Mining Minister Laurence Golborne said.”We’re really happy that this story is reaching a happy ending. I think if we could have planned in advance this history as a movie, probably nobody would have believed that this story would have ended in a way as it is now,” Golborne said.In a way, the story is just beginning — both for the miners, who now must live with their new status as folk heroes and the spotlight that comes with it, and the government, whose attention turns to protecting workers’ safety”I hope this will never happen again,” shift foreman Luis Urzua told Pinera as the miner emerged Wednesday night from the capsule. He had been the shift boss and insisted on being the last miner out of the gold and copper mine.Rescue worker Manuel Gonzalez, the first person to descend more than 2,000 feet in a custom-made capsule to reach the miners, was the last of six rescuers to ascend. He waved and bowed before an underground camera before climbing into the capsule for the last time.
Colleagues and onlookers cheered as Gonzalez surfaced, with one person quipping, “Did you leave everything in order down there? Are the beds made? You didn’t turn off the light.”

But the situation wasn’t entirely light-hearted. Gonzalez also urged the president to push for worker safety.”I hope we have learned from it and that Chilean mining will be different,” he told Pinera. “I hope that things will be done correctly … especially dealing with small mining concerns — that things be done right,” Gonzalez added. “This is what I want.”One problem is the safety standards for smaller mines, Chilean Ambassador to the United States Arturo Fermandois said Thursday on CNN’s “American Morning.”There’s two realities,” he said. One is for the large mining companies, which have excellent safety standards, and the second is for the medium-sized and small mining operations, which have lower standards.

Oversight of the smaller mines must be increased, Fermandois said.For the moment, however, elation over the rescue remained high among Chileans and around the world. Pinera ticked off a laundry list of his counterparts from other nations who had called him Wednesday to offer their congratulations.On Thursday, U.S. President Barack Obama joined the list, hailing the rescue “as a tribute not only to the determination of the rescue workers and the Chilean government, but also the miners and the Chilean people who have inspired the world,” the White House said in a news release.”Yesterday was happiness, spiritual highness,” Fermandois said. “Today, perfection is the word, and the way that man can defy destiny with spirit and also with human support and human efforts.”The rescue showed that Chile has good technical abilities, he said.

As worldwide exultation over the rescue begins to settle, more daunting tasks loomed — understanding the cause of the August 5 collapse and ensuring such an incident doesn’t recur.Pinera said the mine should “never should have functioned as it was functioning; it had a long history of violations.”Representatives of the mine owner, the San Esteban Mining Co., have previously said they will cooperate fully with Chilean authorities and the Chilean Congress in their inquiries about what went wrong.Pinera put the price of the rescue mission at $10 million to $20 million.”Every peso was well spent,” he said.Mario Sepulveda, the second miner extracted, said he hoped to maintain a low profile.

“The only thing I ask, personally, is that you please not treat us like celebrities or journalists,” he said. “I want to continue being treated like Mario Antonio Sepulveda Espinace, the worker, the miner. I love that, and I think that in some shape, way or form I want to continue working.”But that is unlikely.The men — ranging in age from 19 to 63 — will feel the crush of media requests and offers from book publishers, movie and television producers  – Cnn