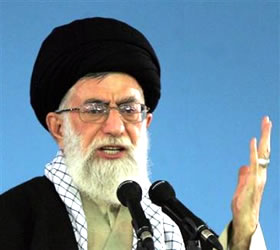 Opposition websites in Iran say authorities have arrested the son of a prominent servative cleric who has been fiercely critical of hardline President Mahmoud Ahmadinejad.The Kaleme and Rahesabz websites reported that Mehdi Khazali, a physician and well-known i-government blogger, is being held on charges of “acting against national security and disturbing public opinion.” He was reported arrested Wednesday and interrogated at Tehran’s Evin Prison.In recent years, Khazali has written openly critical material about Mr. Ahmadinejad in his widely read blog entries, a number of which have received international attention. He has sharpened his commentary in the past two years, after being disqualified from running in Iran’s parliamentary elections.Khazali is the son of Ayatollah Abolghasem Khazali, a hardline member of the Assembly of Experts, the clerical body that oversees the work of Supreme Leader Ayatollah Ali Khamenei. Khazali’s father has disavowed his son’s actions.Meanwhile, the lawyer who defended an Iranian woman sentenced to death by stoning says the European Union and United Nations should restrict Iranian leaders’ foreign travel over alleged human rights violations.

Mohammad Mostafaei, who has been living in Norway after fleeing Iran in July, made his comments in Brussels Thursday before the European Parliament’s human rights sub-committee. He advocated political, not just economic, sanctions against Iran.EU and other leaders have condemned the stoning sentence imposed on the woman, Sakineh Mohammadi Ashtiani. European Commission President Jose Manual Barroso has described it as barbaric.

Ashtiani, a 43-year-old mother of two, was sentenced to death by two different courts in the northwestern city of Tabriz in separate trials in 2006. The first death sentence, by hanging, was for her alleged involvement in the murder of her husband. It was commuted to a 10-year jail term by an appeals court. But the second, by stoning on a charge of adultery, was upheld by another appeals court.Since July, Iranian officials have said repeatedly that the stoning sentence has been stayed. The sentencing has drawn an international outcry that has seen strong representations by the French and Italian governments as well as the Vatican – Voanews