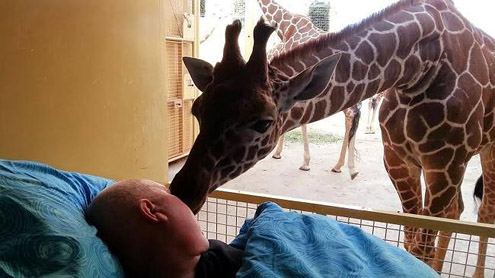 A DYING cancer patient who worked at a Dutch zoo his whole life has said a final goodbye to the animal. The 54-year-old man, identified only as Mario, was approaching by a loving giraffe as he lay in his hospital bed wheeled into Rotterdam’s Diergaarde Blijdorp zoo.

“You could see him totally light up,” Kees Veldboer, founder and director of Ambulance Wish Foundation, told a Dutch newspaper, Algemeen Dagblad. “It’s very special to see that those animals recognise him, and sense that he isn’t doing well,” he said. Mario has a mental disability and has worked as a maintenance man at the zoo for most of his life. He later bid farewell to his colleagues, the paper reported. -Timesofpakistan.pk


Heart Touching Story from Zoo in Holland by thetimesofpakistan