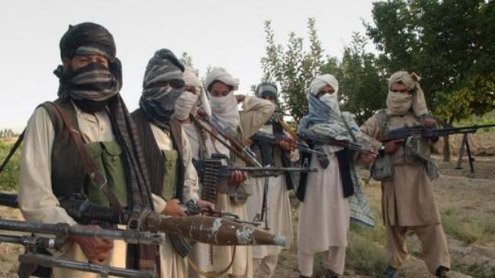 Bombers’ body parts and victims’ blood covered the street and courtyard where five Taliban militants blasted their way into the regional offices of the Independent Election Commission and waged a four-hour battle with Afghan security forces. Afterward, five victims lay dead and the Afghan capital had again been proved vulnerable. The front of the elections building was a bombed-out shell, with bullets pockmarking the facade and the doors and windows blown off their hinges. Election workers who survived described hiding in empty rooms and the building’s basement as gunfire and explosions rocked the compound, which is just a stone’s throw from the home of a leading presidential candidate. Raiz Ahmad, left, and Mirwais, Afghan interpreters, in Kabul last month. Mr. Ahmad says his two brothers were killed in 2012 because of his work for the Army.

Afghans Who Helped the U.S. Fear That Time for Visas Has Run Out MARCH 24, 2014 Two of the five attackers detonated explosive belts at the gate of the compound, while three others rushed in with assault rifles, the police said. Even as the attack was unfolding, the Taliban claimed responsibility, re-emphasizing their campaign to disrupt the April 5 election and punish those involved in it. The victims included two police officers and a provincial council candidate, officials said. At least eight other people were reported wounded. A spokesman for the Interior Ministry, Sediq Seddiqi, said that the police had responded quickly, rescuing more than 70 people trapped inside the compound before killing the remaining attackers.

The compound is beside the home of a leading presidential candidate, Ashraf Ghani, who was not there at the time, officials said. The smell of gas and explosives filled the air, and the ground was covered in glass and granules of concrete torn from the building. As journalists entered the compound, the police were carting off the mangled body of a bomber in the bed of a truck. A worker in the offices of the Independent Election Commission when the attack happened said that heavy gunfire began immediately after the initial blasts. Some workers were stuck in the basement during the attack, while others rushed from the corridor and locked themselves in rooms. “Everyone was shouting; a woman was on the ground bleeding from a gunshot,” said the election worker, Khalil Usmani. “It was crazy, bullets and smoke. No one knew who anyone was.”  -Nytimes

Malaysia Airlines: Search back on for MH370 Wreckage