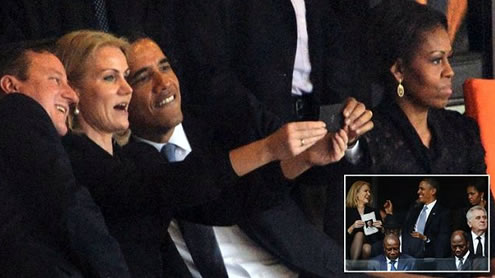 For the thousands of mourners inside Johannesburg’s FNB Stadium it was meant to be a fitting tribute to a ‘giant of history’. But while some reflected on the remarkable life of Nelson Mandela, some world leaders saw it as the perfect opportunity to grab a quick ‘selfie’ with their peers.

Perhaps not in keeping with the tone of a memorial service, US President Barack Obama, Prime Minister David Cameron and Danish leader Helle Thorning-Schmidt grinned as they cosied up for a quick picture at today’s memorial service for the former South African president, prompting an outpouring of criticism.

As the trio posed for the mobile phone snap, Obama’s wife Michelle sat alongside her husband looking less than impressed. Obama had earlier paid an emotional tribute to Nelson Mandela, calling the South African leader a ‘giant of history’ as he spoke in a stadium where around a third of the seats were mysteriously left empty.

The image of the US president, British Prime Minister and Danish leader – who is married to Neil Kinnock’s son, Stephen, who did not appear to be at the event – taking the photo quickly went viral on the internet. It led to a backlash from Twitter users who said it was inappropriate behaviour at an event to remember the life of the anti-apartheid hero, who died last week aged 95.

Twitter user James Armitage wrote: ‘What selfish morons take a ‘selfie’ at a memorial service? Oh yeah that’s right, Barack Obama and David Cameron.’ In a message directed at Mr Cameron, Sarah McDermott said: ‘You have precisely zero class or decorum.’ Writing on Twitter, Mel Huang said: ‘I wonder if Neil Kinnock got an ulcer seeing his daughter-in-law do a selfie with David Cameron…at a memorial service.’

President Obama, who moments earlier had shaken hands with Cuba’s Raul Castro in a historic moment of reconciliation, receivied a rapturous reception for his eulogy at the service in Johannesburg’s FNB Stadium, which started an hour late in the pouring rain. Cyril Ramaphosa, the deputy president of the ruling ANC party who opened the proceedings, said: ‘In our tradition, when it rains when you are buried, your gods are welcoming you to heaven.’

Mr Obama arrived almost an hour after the ceremony started, but was greeted with prolonged applause by the crowd – in stark contrast to South African president Jacob Zuma, who was loudly booed whenever he appeared on the stadium’s big screen. When Mr Zuma walked up to the podium to deliver the keynote speech at the ceremony, he was met with a huge chorus of boos, forcing organisers to bring in a choir to drown out the noise of the crowd and save the president’s blushes.

Mr Obama opened his speech by thanking Mandela’s family, then continued: ‘To the people of South Africa – people of every race and walk of life – the world thanks you for sharing Nelson Mandela with us. ‘His struggle was your struggle. His triumph was your triumph. Your dignity and hope found expression in his life, and your freedom, your democracy is his cherished legacy.’

He continued: ‘Mandela taught us the power of action, but also ideas; the importance of reason and arguments; the need to study not only those you agree with, but those who you don’t.’ Referring to the anti-apartheid icon’s friendship with his own prison warders, the President said: ‘It took a man like Madiba to free not just the prisoner, but the gaoler as well.’ He also spoke out against the dictators from countries such as Zimbabwe and China who pay lip service to Mandela’s legacy while repressing their own people, saying: ‘There are too many of us who happily embrace Madiba’s legacy of racial reconciliation, but passionately resist even modest reforms that would challenge chronic poverty and growing inequality.

‘There are too many leaders who claim solidarity with Madiba’s struggle for freedom, but do not tolerate dissent from their own people. And there are too many of us who stand on the sidelines, comfortable in complacency or cynicism when our voices must be heard.’ – Dailymail