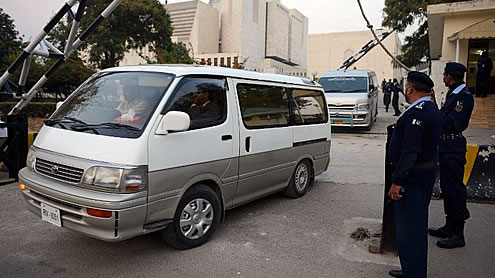 ISLAMABAD: The Supreme Court on Tuesday ordered the federal government to produce all the thirty five ‘missing persons’ before it in seven days.

In the verdict, the chief justice categorically ruled that no intelligence or security agencies, including the Inter-Services Intelligence (ISI), Military Intelligence (MI), Intelligence Bureau (IB) and Frontier Corps, could secretly detain a person for a long time without sharing information relating to his whereabouts with his relatives.

Disposing of a case about production of 35 detainees, including Yasin Shah, who went missing in September 2011 after the army authorities had taken their custody from an internment centre in Lakki Marwat, Malakand, a three-judge bench of the Supreme Court headed by the chief justice held that except for the regulations relating to the Federally Administered Tribal Areas (Fata) and Provincially Administered Tribal Areas (Pata), there was no other law which allowed security agencies to confine people without any authority.

The stance taken by the defence ministry that these persons were not in their custody, the verdict said, proved to be incorrect and regretted that only seven of the 35 internees had been produced on Dec 7. Two of them died in the internment centre and one went to Saudi Arabia. Another two were released but their identity was kept confidential.

The verdict said police at times detained persons but under relevant laws after registration of FIR. It was the responsibility of the civilian government to ensure recovery of the missing persons, it added.

It ordered the prime minister as well as the governor and chief minister of Khyber Pakhtunkhwa to ensure the recovery of the missing internees in seven days and submit a report to the SC registrar after taking strict action against those involved in enforced disappearances.

The judgment said the army authorities under the Pata regulations had taken away 35 detainees from the Lakki Marwat internment centre but only seven of them had been produced before the court and the whereabouts of the remaining could be known only to them.

But contrary to the expectations, the verdict failed to draw appreciation from the legal community. Former Lahore High Court Bar president Ahmed Awais said that nothing substantial had come out of it. “It is just an eyewash,” he said, adding that he was expecting some concrete steps against the political governments and civil and military bureaucracy because they had intentionally defied the court’s orders of producing the missing persons.

“Frankly, I would say the court directions will not provide any fruitful result,” he said, adding that the supremacy of the court had not been taken care of the way it should have been.

Tariq Asad, who had been pursuing the cases of missing persons, said that although strict actions had been ordered in earlier proceedings, an ambiguous and ineffective verdict was announced yet again. “This shows that the judiciary is still not independent and the real power vests with the armed forces and agencies which control everything,” he said.

The judgment said that since no law existed about detention of the undeclared internees, except in KP and that too under Pata regulations, the other three provinces should also come up with proper legislation to discourage the tendency of enforced disappearances. The chief executives of the provinces should also ensure that enforced disappearances do not take place in future.

Referring to the jurisdiction of the apex court, the verdict cited the 1999 judgment in the Northern Areas case and held that being responsible for protection and enforcement of fundamental rights, the court had the authority to assume jurisdiction in such matters.

The court regretted that despite the involvement of the prime minister through Defence Minister Khawaja Asif in the matter and several orders issued since Aug 5, the remaining missing persons had not been produced.

Citing instances from different countries, the court observed that enforced disappearances were considered a serious crime the world over. – Dawn