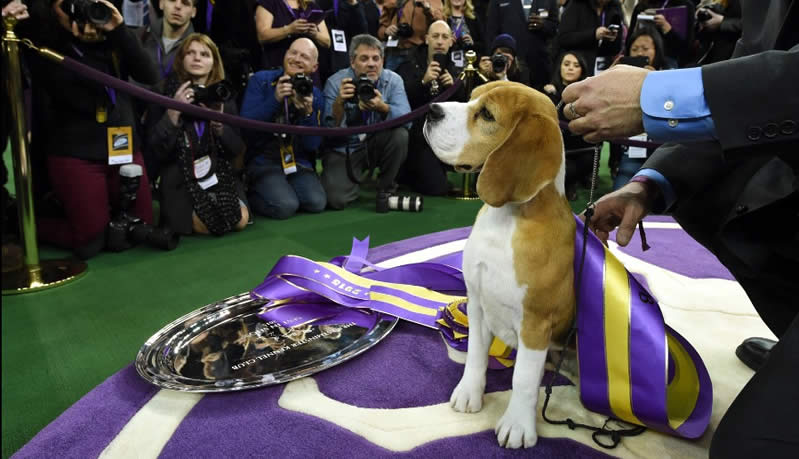 Miss P, from Vancouver, British Columbia, was awarded the Best in Show prize at the 139th Westminster show, the second-longest continuously running sporting event in the United States after the Kentucky Derby.

“She s a princess,” handler Will Alexander said about Miss P, who enjoys eating liver and sleeping on Alexander s pillow at night. Miss P is the second beagle ever to take home the Westminster Best In Show prize, behind her relative, Uno, who won in 2008, said show co-host David Frei. “This is very exciting,” Frei said, while standing in front of Miss P. The tri-colored canine barked excitedly while being draped in purple ribbons. A long-haired, foot-tall Skye terrier, called Charlie, was runner-up. Nearly 200 dog breeds and varieties from 15 countries and all U.S. states except North Dakota and Idaho competed in the two-day event at New York s Piers 92 and 94 and Madison Square Garden.

As part of the show, judges selected the best of each breed and group, divided into seven categories – hound, toy, non-sporting, herding, sporting, working and terrier.  On Monday, the first night of events, Miss P won in the hound group; a dark and puffy standard poodle named Flame won in the non-sporting group; Swagger, a friendly 110-pound old English sheepdog won in the herding group; and a silky-haired shih tzu named Rocket won in the toy group.

Rocket, who wore a sparkling ponytail, is co-owned by Patricia Hearst Shaw, the 60-year-old publishing heiress famous for being kidnapped by, and then apparently joining, the Symbionese Liberation Army in the 1970s. An English springer spaniel, named Liz, won the sporting group; Charlie, won in the terrier group; and a Portuguese water dog, named Matisse, won in the working group on Tuesday evening. Matisse, who was considered a show favorite, is a relative of U.S. President Barack Obama s family dog, Sunny.

“This will be his last Westminster,” said handler Michael Scott. Ahead of the judging, dogs snacked, rested and endured photographs alongside their owners. “He loves to pose,” Denise Wilczewski, from Wall Township in New Jersey, said about her 160-pound komondor, Chauncey, who had won best in breed with his white dreadlock-like hair fanned out at his sides. Best in Show prize was won last year by Sky, a wire fox terrier from California. The winner gets a trophy and embarks on a media tour.

Real Move Towards Last Eight with Win Over Schalke

Obama: US ‘at War With Those Perverting Islam’

Obama: US 'at War With Those Perverting Islam'