Real Move Towards Last Eight with Win Over Schalke 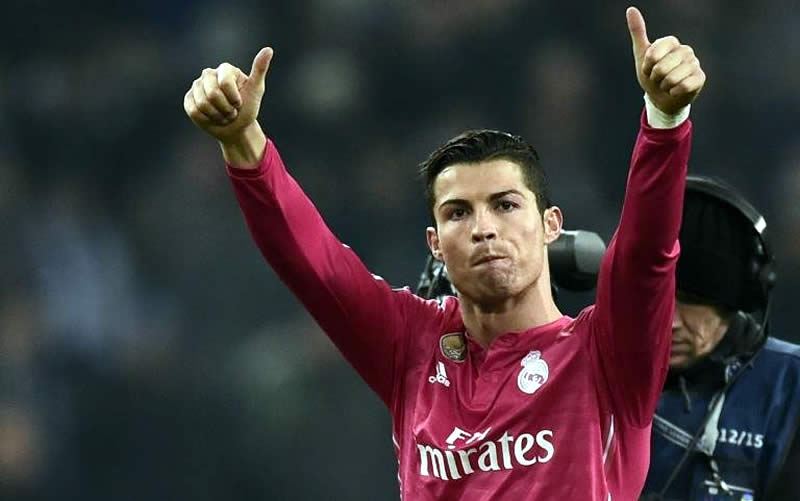 Gelsenkirchen (Germany) (AFP) – Holders Real Madrid have one foot in the Champions League quarter-finals after beating Schalke in the last 16, first leg, in Germany for a second year running.

A Cristiano Ronaldo header gave the visitors a deserved lead at the break and Marcelo rifled home a superb second goal with 11 minutes left as the Spanish league leaders stretched their winning streak in the competition to 10 games. Ronaldo’s goal, his first in four matches, was his 73rd in the Champions League. The Ballon d’Or winner now sits only two behind Barcelona’s Lionel Messi in the all-time scorers list. Schalke’s Champions League debutant Felix Platte had struck the bar before Marcelo’s goal, as the German side fared much better than last season when Real won 6-1 at the Veltins Arena. The home team had employed a compact 5-3-2 formation in the hope of avoiding a repeat of that result and they enjoyed a solid start. With the home fans and players growing in belief, Schalke wing back Dennis Aogo blazed over from the edge of the box after being well set up by Eric Maxim Choupo-Moting and Marco Hoeger. And there were howls of derision when a wild effort from Ronaldo almost went out for a throw-in as Real, playing in unfamiliar pink, struggled to test Schalke goalkeeper Timon Wellenreuther on his Champions League debut.

Soon after that, former Real striker Klaas-Jan Huntelaar followed up a bustling run with a long-range strike that Real ‘keeper Iker Casillas pushed to safety. But on 27 minutes the visitors hit the front with a remarkably simple goal. Aogo backed off Dani Carvajal, allowing the Real full back to deliver a left-footed cross from the right side of the box. Ronaldo was left completely unmarked and timed his run well to head over the advancing Wellenreuther. It nearly got worse for the home team just past the half hour when Toni Kroos played in Karim Benzema but 19-year-old Wellenreuther made just enough contact to prevent the ball squirming into the net. Schalke’s hopes of coming back looked bleak when Huntelaar hobbled off through injury and was replaced by 19-year-old Platte. Wellenreuther then flung himself to his right to keep out a free kick from Ronaldo after the Real attacker was scythed down by Kevin-Prince Boateng.

Boateng was booked as a result of the foul, meaning he will be suspended for the return leg on March 10. Ronaldo continued to threaten but Schalke survived until the interval. In the second half, Boateng twice tried his luck from distance and Isco side-footed over from inside the box for Real before Schalke came desperately close to an equaliser. Atsuto Uchida ran on to a long ball after 74 minutes and cleverly teed up the impressive Platte, who saw his fierce strike hit the bar. Uchida got on the end of the rebound but his effort lacked the power to beat Casillas. And Real ensured they would return to Spain with a commanding advantage when Brazilian left-back Marcelo drove a sublime right-footed strike to the top corner from the edge of the penalty area. -businessinsider