Lung Cancer Sniffed out by dogs 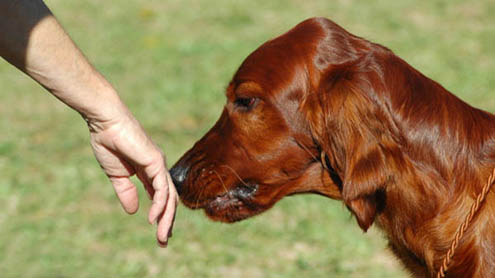 Many dogs are experts at knowing when someone in the house is about to have a snack. Even before their owners head to the kitchen, they will come running from all directions with the hope that some table scraps will make their way to the floor.

It’s a pretty good trick. But nothing like the feat recently accomplished by a dog named Max, who successfully sniffed out cancer in his owner, even before it showed up in her mammogram. Also see: What is your dog trying to tell you? Take the quiz As Max’s owner, Maureen Burns tells it, when her nine-year-old collie-mix started acting strangely, she initially thought it was Max who was sick. Her normally hyper and happy dog suddenly became lethargic and depressed.

He also started acting strangely, sniffing at her breast and then backing off with what Burns described as a “sad look in his eyes.” Burns did have a small lump in that breast, but her most recent mammogram had been clear. Still, she went to her health care provider and after several tests was told once again that she was fine. But Max’s odd behavior persisted, and Burns felt sure that he was trying to tell her something.

So she went once again to the doctor and asked for a biopsy of the lump in her breast. It was only then that Burns learned that the lump was in fact cancerous. Also see: Diabetic alert dogs save lives When she returned home, Burns says that Max’s behavior completely returned to normal. “He put his nose across my breast to check where the operation had been and was wagging his tail and his eyes were happy,” Burns said in this heartwarming video. “I love Max and I owe him so much.” -Yahoo