No Result
View All Result
Home Sports Other Sports Snooker

by ToP
in Snooker
1 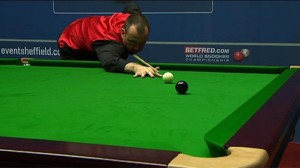 Mark Williams won the frame he needed to seal a 13-4 demolition of Jamie Cope and reach his first World Championship quarter-final in five years. After a top break of 72 in session one, the two-time champion knocked in two centuries to build up a 12-4 lead. An error-ridden Cope produced some late fight with breaks of 74 and 72, but had a mountain to climb in the last session as the world number two eased through. On-song Judd Trump won his last five frames to lead Martin Gould 11-5.

Trump, fresh from his China Open glory and more recently his first-round win over last year’s champion Neil Robertson, was put on the ropes by a typically aggressive and entertaining Gould and would have been relieved to share the first four frames to lead 7-5. Despite some sloppy safety play, a 108 showed the potential of Trump’s potting prowess and after the mid-session interval the Bristolian moved swiftly up through the gears.

Breaks of 69, 61, 84 and 67 secured those five consecutive frames as the 21-year-old knocked the stuffing out of a battling Gould. He will need only two more frames to progress when they resume on Saturday morning. But fans should write off Gould, the ‘Potter from Pinner’, at their peril. Drama follows this exciting talent at the Crucible, considering his last frame defeat by Robertson in last year’s second round after blowing leads of 6-0 and 11-5. For all the fireworks of Trump and Gould, the smoothest and calmest of performances on Friday belonged to Williams, who will now prepare to play Barry Hawkins or Mark Allen for a place in the semi-finals.

The 35-year-old, aiming to add to the world titles he won in 2000 and 2003, told BBC Sport: “I played OK in patches. He gave me a lot of help at the start. He was missing a few balls and I managed to pick off his mistakes. “It would have been nice to win it with a session to spare but it’s nice to win any score. To beat someone in the top 16, you don’t expect it these days.”
Ali Carter and Graeme Dott Carter and Dott were locked at 8-8 after Friday’s evening session Williams, whose last appearance in a Crucible quarter-final was a 13-11 defeat by Ronnie O’Sullivan in 2006, needed just 10 minutes on Friday evening to complete a miserable 36 hours for Stoke’s 14th-ranked Cope.

A 72 may have been the Welshman’s top break in the first session, but buoyed by his opponent’s mistakes, the Ebbw Vale-born star finally stepped up a gear with successive tons – a 106 and 109 – to open up a 12-2 lead and get within one frame of victory. Apart from the occasional burst of magic, including an opening 96 to get the deficit back to five frames at 7-2, the performance of Cope, known as the ‘Shotgun’, was clouded by a string of careless errors.

The 25-year-old from Stoke rarely settled after his lively opening and had to watch the left-hander take control. Although he rattled off a 74 and 72 in the afternoon’s last two frames, Williams wasted no time to wrap up his easy triumph. With O’Sullivan, Shaun Murphy and John Higgins possible opponents in the semi-finals, Williams added: “It’s a tough half of the draw – all the big guns are there. But to win this tournament I’ve got to thankfully play the balls and not the player!”

In Friday’s other matches, world number eight Ali Carter had the better of the evening session against 2006 champion Graeme Dott to end the evening level on 8-8, and Barry Hawkins, making his sixth consecutive visit to the Crucible, edged 5-3 ahead of Mark Allen. Dott came out of his tough opening session against Carter, 2008 finalist and last year’s semi-finalist, with a 5-3 lead. The gritty Scot, who has reached the Crucible final three times, sneaked three first-session frames on the black and opened up a two-frame lead with a stunning doubled pink. But the evening session was a different matter. After the first two frames were shared, Carter won four in a row, with breaks of 63, 86, 112 and 115, to open up an 8-6 lead.

Dott had the final say, though, recording a 70 break to pull it back to 8-7 and then punching the air with delight as he won the final frame of the session 74-60 to end the day level at 8-8. The victor of that match will play Trump or Gould.Williams cruises into last eight – BBC

7-Nation Snooker: Thepchaiya to clash with Ayouri for title today