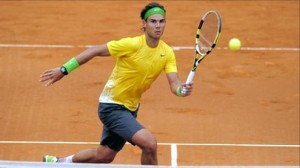 Nadal has a 28-1 record in Barcelona and has won the title five times World number one Rafael Nadal stretched his unbeaten run on clay to 32 matches as he beat Gael Monfils to reach the semi-finals of the Barcelona Open.

And eighth seed Nicolas Almagro, who will break into the world’s top 10 next week, beat Juan Carlos Ferrero 6-3 6-3. Nadal is undefeated on clay since 2009 and said he was pleasantly surprised by his latest win.

“To win 6-2 6-2 is a very positive result and was much better than I expected,” said the 24-year-old, who has won the tournament five times before but missed last year’s event because of a knee injury. “I won in Monte Carlo last week and now to be in the semi-finals in Barcelona is super positive, I couldn’t have started the clay season any better. Now I have to keep on working.”

World number 56 Dodig was also pleased with his progress. “It’s been a great week for me,” said the Croatian. “I’ve played some great matches and I’m really looking forward to playing one more match – BBC