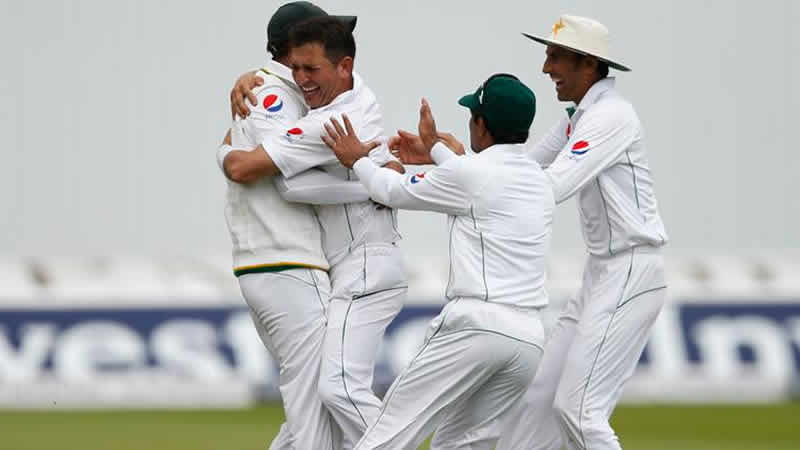 Yasir Shah marked his first Test outside of Asia and the United Arab Emirates by taking 10 wickets in the match as Pakistan beat England by 75 runs in their series opener at Lord s on Sunday.

Leg-spinner Shah took 10 for 141, including a second-innings haul of four for 69 on Sunday s fourth day.

His return, which surpassed Waqar Younis s previous Test-match best for Pakistan at Lord s of eight for 154, was central to the tourists going 1-0 up in this four-match series. Mohammad Amir in his first Test appearance since he was given a five-year ban for his part in the 2010 spot-fixing scandal at Lord s – Pakistan s last Test at the home of cricket – ended the match when he bowled last man Jake Ball. Victory prompted the whole Pakistan team to perform several press-ups in front of the Lord s Pavilion – a reference to their pre-tour military boot camp. England, set 283 for victory, were all out for 207. They were holding firm at 195 for six thanks to a determined stand of 56 between Jonny Bairstow (48) and Chris Woakes (23).

But Bairstow s three-and-a-half hour innings ended when he was bowled trying to whip a Shah leg-break. England were soon 196 for eight when left-arm quick Amir bowled Stuart Broad. Shah then had Woakes, who took 11 wickets in the match, caught at slip before Amir ended the contest. It was Pakistan s unheralded left-arm quick Rahat Ali who removed England s top three to reduce the hosts to 47 for three. His back-off-a-length ball had England captain Alastair Cook (eight) edging through to wicket-keeper Sarfraz Ahmed. Cook s opening partner Alex Hales (16) then carelessly chased a wide Rahat ball outside off stump, with Mohammad Hafeez holding a good catch at first slip.

Joe Root struck two superb cover-driven fours off Rahat but the star batsman fell into a hooking trap on nine when he paddled a Rahat short ball to Shah, set back at deep square leg. James Vince too got off the mark with a cover-driven four off Rahat. Vince was on nine when his edged drive off Rahat flew to Younis Khan only for the second slip to drop both the initial low catch and the rebound. Vince struck nine fours, mainly through the offside, on his way to a Test-best 41 not out at lunch without looking assured. He had added just one run to his lunch score when, not moving his feet, he edged a booming drive of a Wahab Riaz delivery that moved away to second slip Younis, who this time clung on at the second attempt.

England were making steady progress at 135 for four when leg-spinner Shah, who took six for 72 in the first innings, bowled recalled left-hander Gary Ballance behind his legs for a painstaking 43 with a delivery that spun out of the rough. Moeen Ali (two) then charged down the pitch in an attempt to drive Shah, only to be bowled between bat and pad by a well-flighted delivery. The run-rate slowed as Bairstow and Woakes dug in, knowing they had just the tail behind them at a sun-drenched Lord s. Riaz, the third of Pakistan s left-arm quicks, was desperately unlucky as he repeatedly beat the bat during an excellent spell of reverse-swing bowling. Earlier, Pakistan added just one run to their overnight 214 for eight as Stuart Broad cleaned up the tail. Shah did not add to his 30 but more than made amends with the ball.