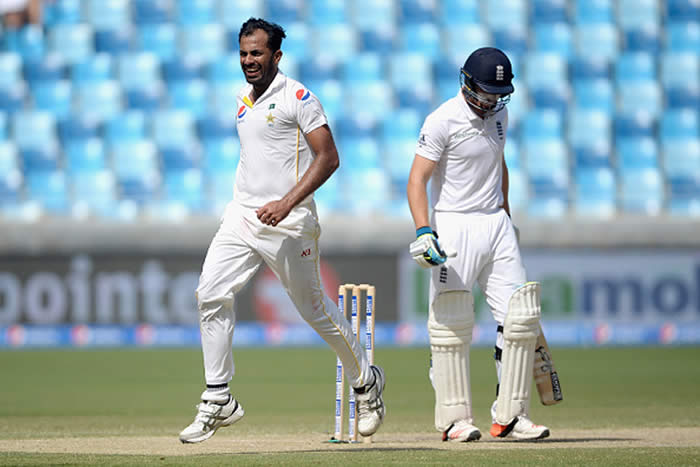 England complained to the match referee that Pakistan paceman Wahab Riaz deliberately trod on the ball during the fourth day of the second Test on Sunday, British media reported.

The incident took place during England’s second innings with batsman Joe Root getting involved in a heated argument with Riaz.

“Root complained to the umpires because he felt Pakistan fast bowler Riaz had deliberately trod on the ball,” the Daily Mail reported. It added: “England coach Trevor Bayliss visited the match referee Andy Pycroft to alert him to the incident, as Root — who was battling to save the game -– and Riaz briefly became involved in a heated exchange.” But Pakistan team manager Intikhab Alam said he was unaware of the incident despite British media claiming the incident was an attempt to alter the state of the ball. “I am not aware of any such report or incident,” Alam told AFP.

“Riaz was not summoned by the match referee so there is no issue on that.” England assistant coach Paul Farbrace played down the issue. “In the heat of battle you are going to see the odd exchange between players,” said Farbrace after the day’s play. “Riaz certainly won’t be signing for Chelsea in the Premier League with his footballing skills. The umpires dealt with it at the time and that is the end of it.” England, chasing a daunting 491-run target, were 130-3 at close with Root batting on a fighting 59 and Jonny Bairstow on six. Pakistan need seven wickets on Monday’s final day to take a 1-0 lead in the three-match series after the first Test ended in a draw in Abu Dhabi. (AFP)