Ind vs Aus: Another batting collapse for India, Australia wrest initiative at SCG 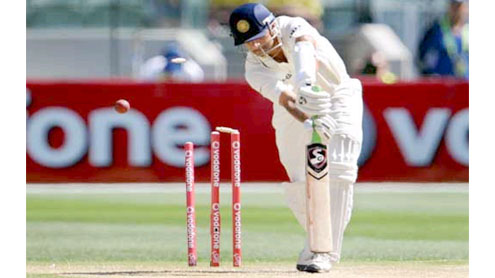 SYDNEY: India’s famed batting line-up came a cropper yet again against a disciplined Australian pace attack as they allowed the home side to wrest the early initiative on an engrossing opening day of the second Test on Tuesday.

Indian captain Mahendra Singh Dhoni opted to bat after winning the toss but his decision boomeranged as the visitors were dismissed for 191 in 59.3 overs on a seaming and bouncy pitch at the SCG, which is hosting its centenary Test.But for Dhoni (57 not out) and Sachin Tendulkar (41), the Indian total would have been much lower as their other colleagues struggled against an inexperienced but disciplined opposition pace bowling attack.

Zaheer Khan though threatened to bring India back into the match with three quick scalps early in Australia’s reply. The home side, who are leading the four-match Test series 1-0, were 37/3 at one stage before the experienced hands of Ricky Ponting (44 batting) and Michael Clarke (47 batting) steered them to 116/3 at close. The hosts trail by 75 runs with seven wickets in hand.

Pacers took centrestage on a day when all 13 wickets fell to them. James Pattinson (4/44), Ben Hilfenhaus (3/51) and Peter Siddle (3/55) were the irresistible force for the Australians while the magic of Zaheer fetched him 3/25 in his first spell of six overs for the visitors.The veteran Indian left-arm pacer sent opener David Warner (8) packing off the last ball of his first over itself after the left-hander edged on to slips. VVS Laxman at second slip had the chance slip out of his hands but Sachin Tendulkar at first slip took the catch on rebound at first slip.

Zaheer took another wicket off the very first ball of his second over when Shaun Marsh edged another one to VVS Laxman who made no mistake this time.Zaheer Khan could not get his hat-trick but before his first spell was out, he made one straighten on left-handed opener Ed Cowan and the emphatic appeal for a leg-before was promptly upheld by umpire Ian Gould.Ponting and Clarke then showed great skills on sparring against short-pitched deliveries and playing attacking strokes now and then. Their running between the wickets was exceptional too.

Both Ponting and Clarke played several attacking strokes and by close had tilted the scales in favour of the hosts.Ponting has so far batted for 108 minutes and hit five fours from 62 balls while Clarke has faced 59 balls and lasted 77 minutes, hitting seven fours. The two have so far put on 79 runs for the fourth wicket.Earlier in India’s innings, opener Gautam Gambhir lasted only three deliveries before his attempt to push towards mid-wicket off a James Pattinson delivery bounced more than expected and took an edge to Clarke in the second slip.

Rahul Dravid, who looked not completely sure of his methods against the Australian quicks, played far too front of his pads to Peter Siddle and a catch which rebounded off his bat to pads was crisply held by Cowan at forward short leg.India slipped to 59/4 after Virender Sehwag (30) and VVS Laxman (2) departed in quick succession. Both were dismissed by Pattinson, caught in the slip cordon.Sehwag, who was dropped at the slips by Ricky Ponting off Pattinson when on 23, did not last long and edged a catch to wicketkeeper Brad Haddin to make it 57/3 for the visitors.He hit four fours and lasted 82 minutes and 51 balls but was never quite at ease throughout his innings.

It soon became 59/4 when Laxman lashed out at a fullish swinging delivery and steered it to Shaun Marsh in the gully. India took the lunch at 72/4 from 26 overs.Sachin Tendulkar, in quest of his 100th international century, looked in fair comfort till he dragged a delivery from Pattinson on to his stumps.Walking in to a standing ovation, Tendulkar was quickly off the block and raced to 20 off 24 balls before falling wickets forced him to go to his shell and he went scoreless off the next 20 deliveries.

The situation for India did not improve after lunch when Virat Kohli (23), fairly settled in his stay of 41 balls, played forward to a delivery from Siddle which bounced more on him and took the edge to wicketkeeper Brad Haddin. India were 96/5 then and staring at the end of the barrel.India received the severest blow to its plan when Tendulkar hungrily went after an over-pitched yet widish delivery from Pattinson and dragged it on to his stumps. The little master made 41 off 89 balls and hit nine fours in two and a quarter hour of batting.

Australia finally met with resistance from the Indians as skipper Dhoni and Ravichandran Ashwin (20) added 54 runs for the seventh wicket.Ashwin held his ground as the Australians peppered him with short-pitched deliveries and kept a fielder in front of square leg. The young off-spinner kept hooking such deliveries to good effect.

However, just before tea break, Australia took two wickets off two balls. First, Ashwin aimed to flick Ben Hilfenhaus and edged a catch into slip cordon and then Zaheer Khan (0) was all in tangles to a snorter of a delivery which he edged to Cowan at forward short leg.India were 178/8 at tea and were all out quickly on resumption for 191. Dhoni played a redeeming unbeaten innings of 57, batting for 110 minutes and hitting nine fours from 77 balls. – BBC